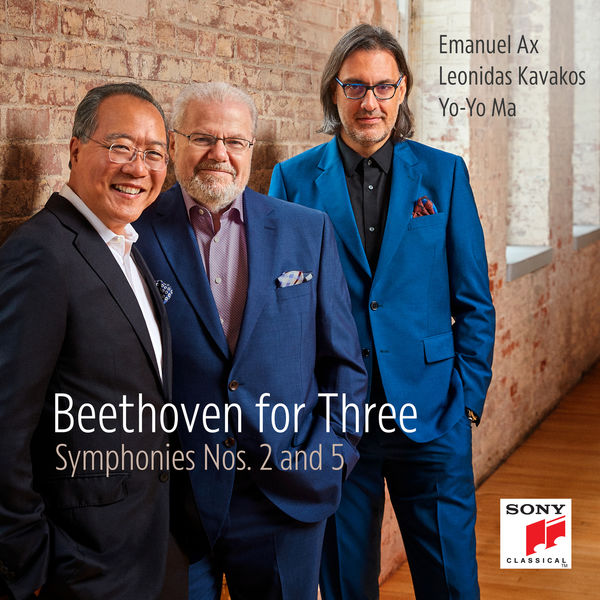 Beethoven for Three transports listeners to the turn of the nineteenth century, when audiences would have been more familiar with the composer’s music in arrangements for piano trio, string quartet, or piano four hands than for full orchestra. Here, Ax, Kavakos, and Ma seek out the most essential elements of Beethoven’s musical language, pairing his second symphony, arranged for trio by Beethoven’s pupil Ferdinand Ries, with his fifth — among the most recognizable pieces in western classical music — in a newly-commissioned arrangement by Colin Matthews.

Performing the symphonies on three instruments is a challenge that yields a wealth of insights about Beethoven’s writing process. “The idea of actually being able to play the beginning of the fifth symphony with your hands is just an incredible thrill,” says Ax. “And you learn a lot about his kind of combination of controlled mania with an incredible lyricism — and you get so much of that in both the fifth symphony and the second … It was an incredible thrill to work on this over and over and over, just trying to get the notes.”

The new release comes just days before the trio begins a tour of the United States, with performances scheduled in Washington, DC (March 7), New York, NY (March 8), Boston, MA (March 9), Chicago, IL (March 11), and Stony Brook, NY (March 12).Beethoven for Three continues a thread begun by Ax, Kavakos, and Ma at the 2021 Tanglewood Music Festival, where they first played Beethoven’s Symphony No. 2 in trio format. “No pale shadow was this,” wrote The Boston Globe. “The arc of the piece was finely honed, with no iteration of any musical idea exactly the same; the gentle smile that lit up Ma’s face when he watched the others during his tacets was music in itself. It’d probably be hard to find a person who was happier to be there.”

Ax, Kavakos, and Ma first performed together as a trio at the 2014 Tanglewood Festival, playing a program of Brahms’s piano trios. Their first recording effort, Brahms: The Piano Trios, was released in 2017 to universal critical acclaim; Gramophone observed that “These performances get straight to the heart of Brahms’s music, relishing its pull of opposites,” while Limelight noted “There’s no doubting the ardour that these players bring to the music, which is delivered with an eye to creating broad, sweeping phrases … there are plenty of opportunities to swoon along the way.”

Brahms: The Piano Trios was followed by a US tour which met with rave reviews; the Chicago Tribune wrote that “One could only marvel at how intuitive and spontaneous these performances were, with each player kindling immediate responses from his colleagues … Chamber music playing doesn’t get any better than this,” while The Boston Globe declared “it was clear the musicians were of three unique minds, and with that, three unique and brilliant approaches that made for fascinating musical conversations onstage. For their distinct individuality, they were no less harmonious.”

“I wasn’t expecting to be absolutely bowled over by Colin Matthews’s arrangement of the Fifth Symphony, but I was – and still am…Matthews has done a most impressive job of paring the music down to its essentials while retaining its character and emotional impact.” (Gramophone Magazine)