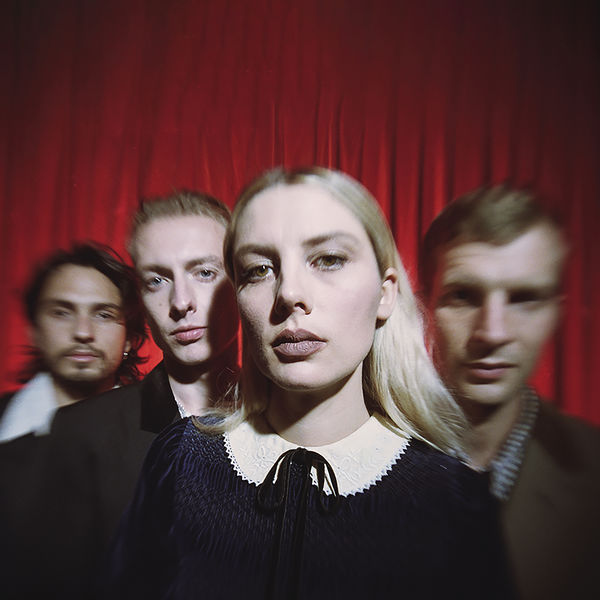 London, England’s Wolf Alice will release the deluxe version of their Mercury Prize-nominated third album, Blue Weekend, on October 29th on RCA/Dirty Hit. The deluxe version of the record – which received universal acclaim on both sides of the Atlantic when the original was released this past June – will feature a cover of the Alex G song “Bobby,” as well as live versions of other album favorites known as “The Pool Sessions.”

Blue Weekend is the follow-up to 2018’s, Mercury-prize winning Visions Of A Life, a record that cemented the bands position as one of the UK’s most exciting bands, debuting at No. 1 there upon its release. Following an avalanche of critical praise and DSP playlisting across the world, Blue Weekend was nominated for the prestigious Mercury Prize, making them one of the only artists to be nominated for every single album they’ve released.

Wolf Alice are Ellie Rowsell (vocals, guitar), Joff Oddie (guitar, vocals), Theo Ellis (bass) and Joel Amey (drums, vocals). It has been a decade since the band began as a duo of Ellie Rowsell and Joff Oddie, then later expanding to a four-piece, with Joel Amey and Theo Ellis joining the group. Since then, the band saw their 2015 debut album My Love Is Cool soar to #2 on the UK charts, their sophomore album Visions Of A Life win the 2018 Hyundai Mercury prize, and a GRAMMY nomination for Best Rock Performance

The band have graced the stage at various worldwide festivals including the Pyramid Stage at Glastonbury, Coachella, and The Governors Ball NY. They played a massive 187 shows on the Visions Of A Life world tour – including a sold out Alexandra Palace, and two sold out dates at Brixton Academy. TV appearances include The Late Late show with James Cordon. Their most recent album Blue Weekend (produced by Markus Dravs (Arcade Fire, Björk, Brian Eno, Florence + The Machine) sees Wolf Alice embrace a newfound boldness and vulnerability in equal measure.Wolf Alice’s immensely successful second album, Visions of a Life, suggested they could go in any number of directions, but the one they chose for Blue Weekend is big with a capital B. On the band’s third album, they play to the back of the arenas and stadiums these songs were designed to be performed in. Wolf Alice announce their ambitions — and their ability to deliver on them — with the vast two-part song “The Beach,” which opens the set by swelling to ever-greater peaks and closes it on a sweetly philosophical note. In between, Blue Weekend demonstrates just how much the group’s power and control have grown in the four years since Visions of a Life. The extra time they spent polishing the album in the studio with producer Markus Dravs during the COVID-19 lockdown was well spent: though songs like the luxurious Los Angeles homage “Delicious Things” reach a massive scope quickly, Ellie Rowsell always maintains a connection with her audience as she and the band zoom in and out from intimacy to majesty with cinematic skill. Even as they take their dream pop to epic new heights on the hauntingly seductive “Lipstick on the Glass,” they’re still capable of capturing tiny nuances on songs such as “Feeling Myself,” where Rowsell’s introspection also reflects the voyeuristic nature of witnessing someone else’s self-expression. Even more so than on their previous albums, Wolf Alice stretch themselves emotionally as well as musically, particularly on “How Can I Make It OK?,” a striking power ballad equally indebted to Cocteau Twins and Olivia Newton-John that surges forward on a huge riff as Rowsell sings “to live in fear isn’t to live at all.” Though Blue Weekend is dominated by slower songs, its outbursts are just as vital. “Smile”‘s collage of funk, industrial, pop, and acoustic elements is muscular and vulnerable at the same time, with Rowsell snarling “I ain’t ashamed of the fact that I’m sensitive,” then declaring “If you don’t like me/Well, that isn’t f*cking relevant” soon after. The band’s famed stylistic shifts feel more natural than ever, whether they’re rocking out or harking back to their folky roots on “Safe from Heartbreak (If You Never Fall in Love)” and “No Hard Feelings,” a song about acceptance that skips away from heartache with deceptive ease. Songs like these ensure Blue Weekend never feels overwrought despite its ambition and lengthy creative process — instead, it’s the kind of big, unabashedly emotional album that people make memories to, and some of Wolf Alice’s most confident and fully realized music. – Heather Phares