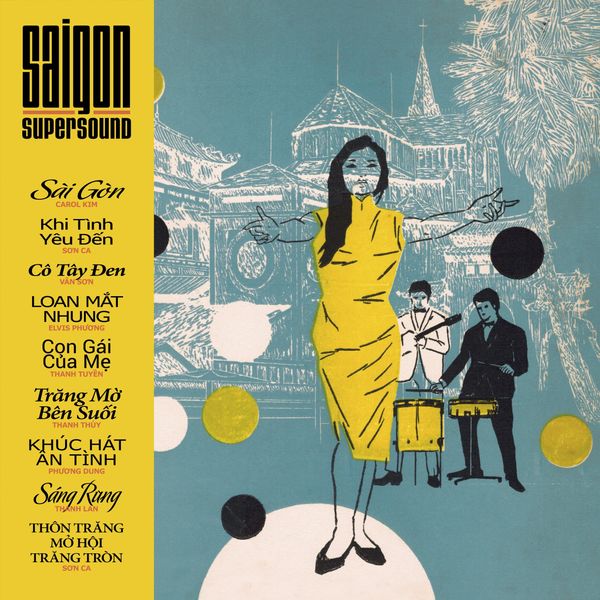 Saigon Supersound Continues to present more interesting tunes of a musical era that has long been obscured. With the well received Volume 1, we are very delighted to dig deeper and share with you the beautiful music of a short but significant period in Vietnam‘s history.

Much like the country itself, the music of Vietnam has endured many twists and turns through the fate of history. As the result of the Geneva Accords in 1954, Vietnam was divided into two. From the North, the Nationalist forces fought to reunite Vietnam as a Communist State, while the American troops backed the government of the South.

This caused a mass migration of around 600.000 to 1.000.000 Northerners to the South, which includes many Tân Nhạc (Modern Music) singers and songwriters. Often characterised by its emotive, poetic and prolific personality, Tân Nhạc continued to freely develop in the South and progressively vacating from the influences of its main inspiration, French music. In the North, the Resistance music, or the so-called Nhạc Đỏ (Red Music), which promoted socialism, patriotism and anti-capitalism was the only genre allowed to be played on national radio. Tân Nhạc was something new to the South Vietnamese repertoire, which consisted mainly of Cải Lương (Renovated Theatre Music) – a form of Vietnamese folk opera.Between 1954–1960, the theme of hometown (quê hương) was a main inspiration for many songwriters such as Hoàng Thi Thơ, Lam Phương and Nguyễn Hữu Thiết. The 9th title of the compilation, “Thôn Trăng Mở Hội Trăng Tròn” showcases a variety of images that were often described in this genre: the harvest moon, playful children, old mother… This romanticisation of the countryside directly reflects the land reformation in Vietnam (cải cách ruộng đất), a policy of confiscating the land of landlords and rich peasants through force and redistributing it to poor and landless peasants. During this time, songs such as “Khúc Hát Ân Tình” were sang by many in the South. With simple, uncomplicated lyrics and beautifully written melodies, this music did not only take to people‘s heart but also provided the Southerners with a new medium to convey their feelings with ease.

Saigon, the bustling capital city at the time was often depicted as The Pearl of Southeast Asia. The lively atmosphere of Saigon was described by writer Hồ Biểu Chánh: “At the big gates, people tightly filled the space, the lads with the shiny combed hair, the ladies with the gaudy red lips, the old people with the tobacco pipe in their mouth jubilantly churning out smokes, the mum walking with her kids, some arrogantly running in front, some firmly walking at the back, loudly calling for each other, people bumping into each-other at the shoe shop, crowds roaring to enter places, people wearing fancy clothes, blended on the street with the working class folks without judgement, but happiness seem to shine on their faces”.

This cosmopolitan, charming and prosperous perspective of Saigon is most evidently seen in the first title “Sài Gòn”, written by Y Vân, where the rhythms of Saigonese lifestyle could be instantly felt through the upbeat cha-cha-cha. The song is arguably the anthem of the city to this day. However, in the shadows of this glossy, gold-coated city, lies many people on the verge of poverty, of prostitution, of crimes.

The 4th title, “Loan Mắt Nhung”, soundtrack to the same titled movie, describes the story of a young man whose fate has forced him to become a famous gangster in Saigon. It is also one of the rare blues that became a hit in South Vietnam. Such topics were never explored in Tân Nhạc up until the rise of the Vietnamese bolero music in 1960. Almost simultaneously, when the queen of Bolero Olga Guillot left Cuba to tour around Europe for the first time in 1958, another queen of Bolero was also born for the Vietnamese people; Thanh Thuý. Many argued that the bolero rhythm was imported to Vietnam to fulfil the need of western dancing for the elites, but we quickly saw that it instead evolved into the music for the masses. Often with down-to-earth lyrics that is distinctively Southern, Thuý’s voice quickly became a staple of the genre, and inspired generations of singers to follow. The two titles in this compilation, “Trăng Mờ Bên Suối” and “Những Đồi Hoa Sim” are essential examples of this movement for Vietnamese music.

There is a Vietnamese saying about the relationship between a songwriter and a singer in this musical era: “đo ni đóng giày” which means “to be tailor-made”. In fact, the songwriters usually tailor-made the songs for a specific singer that they have in mind. Then, they’d spend countless hours to train the singer the way the song should be performed. In this way, a recording made by Phương Dung for instance, will always sound unique and deeply meaningful as she would be the only person to fully understand the intent of the songwriter. Not only that, the way music was recorded with the band was much different to the way it is recorded now. The band would typically follow a “leader”, who will decide the tempo, solo and improvisations of a recording. The fate of a recording lies in the mood of that leader, maybe he would play the music fast because he’s angry on that day, maybe he will play the music slow because he’s sad. Every recording made in this era is then an organic combination of human experiences, communications and uniqueness.

In 1965, the first American troop landed in Vietnam, bringing with them the musical influences of the Beatles, Bob Dylan, Jimi Hendrix, Elvis Presley… The Vietnamese people quickly integrated it into the repertoire with hope to further diversify the music of Vietnam. As an attempt at rock music, Kích Động Nhạc (Action music) was born, starring the biggest duo at this time: Hùng Cường and Mai Lệ Huyền. The pair specialises in the commercial rock scene with very energised live shows and recordings, mostly portraying a wilder way to love and relationships between a soldier and their lover. It is here that the funk, soul and rock ´n´ roll influences are evidently found in Vietnamese music.

The last colour that is offered in this compilation “Lơ Thơ Tơ Liễu” shows a variety of styles combined into one song; influences of Chèo (Vietnamese satirical musical theatre), Cuban stylised piano solo, Ca Dao (Vietnamese folk song), wrapped in a distinctive humour exclusive to the band AVT. Perhaps what could be seen through these shifts and changes of Vietnamese music is a relentless quest to find its identity. Constantly changing and learning from different cultures, the modern music of Vietnam cuts a window into the soul of a Vietnamese person and the country’s history as a whole. With that, we hope that Saigon Supersound Volume 2 would take you on a trip back to the unique atmosphere of Saigon through the many different palettes of music that this beautiful place offers.