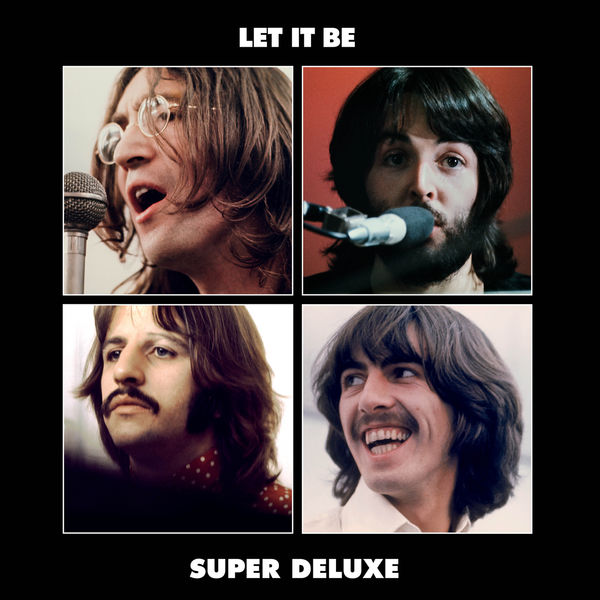 By 1969 the Beatles’ universe had become terminally messy: tensions between the four members were at an all-time high and the band was coming apart. As this collection’s producer Giles Martin (son of the band’s producer and confidante George Martin) says in the liner notes, by that time the foursome had become “a bit like a married couple trying to go on dates again.” The personal struggles and financial tangles they’d been through as a band had done its damage and the magic was ebbing away. In an effort to get the foursome back to what it felt like to perform live—and perhaps foster a return of their famous camaraderie—Paul McCartney came up with the idea of filming the band playing an entirely new batch of songs. Launched at Twickenham Film Studios, the production soon moved to the band’s own home studio in the basement of the Apple Corps headquarters on Savile Row. The group even reconvened on the building’s rooftop for an impromptu concert that was filmed and recorded but also stopped after less than an hour by the police due to noise complaints. The resulting album, Get Back, with Glyn Johns as engineer and co-producer, was eventually shelved in favor of Abbey Road (released in September 1969). In 1970, after Lennon had officially left the band, the remaining trio finished the album, now known as Let It Be, switching out takes, dropping several songs and resequencing it with help from Phil Spector who overdubbed his usual grandiose orchestral arrangements onto four tracks. (In 2003 McCartney’s dissatisfaction with Spector’s additions—particularly on his tune “The Long and Winding Road”—led to a stripped-down version of the album closer to John’s original concept, called Let It Be…Naked.) Now the Giles Martin-led Beatles reissue program which began in 2017 with Sgt. Pepper’s Lonely Hearts Band has finally reached Let It Be and the results are once again rewarding for Beatles fans and newcomers alike.

The five volumes are yet another tantalizing glimpse into the band’s storied creative process. Although the reception for the album was largely mixed on release—some reviewers savaged it—the songs in retrospect are nothing short of amazing; this is by no means bottom-of-the-barrel Beatles. Tunes like “Get Back,” “Let It Be,” and “The Long and Winding Road” are as good as anything the band ever wrote or recorded. The first volume here contains the original album in a fresh 96 kHz/24-bit remix that like the other Giles Martin-directed mixes is sharper and brighter than the original but not fundamentally different. The biggest aural change has Ringo Starr’s drums brought up and forward in the mix, like in the previous reissues in the series. Perhaps most important about this edition of Let It Be is that after years of being bootlegged, Glyn Johns’ 1969 Get Back mix has finally been officially released in improved sound and can now be fairly compared to the 1970 version. Deliberately jumbled, with lots of studio patter left in, and meant to be a window into the band’s loose, humorous way of making music (or what they hoped to project as such), it still feels sloppy and unfinished, which may be why The Beatles—who waffled throughout the process and initially wanted that ambiance—rejected it in en masse. Johns’ mix opens with “One After 909” (written by Paul and John as teenagers) and then proceeds through looser versions of “Don’t Let Me Down” (with fabulous accompaniment from keyboardist Billy Preston) “Dig A Pony,” and “I’ve Got a Feeling” with Lennon adding his usual silly, sardonic asides throughout. George Harrison’s “For You Blue” opens with the sound of ice cubes swirling in a drink. McCartney’s much maligned “Teddy Boy,” which didn’t make the final cut of Let It Be but became part of McCartney’s first solo album, is heard here with Lennon’s famous mocking “Do-Si-Do” background comment left intact.

Volume two features an exuberant rave up of “Maggie Mae” and “Fancy My Chances with You”—a tune John and Paul wrote together in 1958. The overall vibe in these sessions is not nearly as hostile as history would have it as evidenced by a take of “Let It Be” mashed up with “Please Please Me.” A jammy take of “One After 909” is good fun, take 19 of “Get Back” features Paul laughing in rhythm with the tune, and George’s instrumental jam up of “Wake Up Little Susie” which transitions into his song, “I Me Mine” with a blues break in the middle is a wonderful reminder of his essential but often forgotten part of the group.

Early versions of tunes that were soon to appear on Abbey Road or the member’s subsequent solo albums are featured on the third volume. A rehearsal shows George’s “All Things Must Pass,” the title track of his debut solo album, beginning to take shape. A slow take of “She Came in Through the Bathroom Window,” that mixes music with studio patter shows them working through an arrangement. Ringo, who is rarely heard, appears in an early piano-and-voice version of “Octopus’s Garden” where teacups can be heard clanking in their saucers. In a jam of “Oh! Darling” Paul speaks a verse before he and Lennon go back to raggedly harmonizing, while Preston adds his spot-on, amazingly instinctual keyboard flourishes. In the same song, John announces that Yoko’s divorce has gone through. Preston sings a version of “Without a Song,” a tune he’d later release on his 1971 album I Wrote a Simple Song. The passionate unreleased 1970 Glyn Johns mix of “Across the Universe” on volume five is a reminder of the utterly unique pop universe that The Beatles had created. That’s further confirmed in the same collection by a sparkling new mix of the single version of “Let It Be.” Yet another entry—the last?—in Giles Martin’s illuminating efforts to expand on the legacy, the new Let It Be provides deeper insight into the essential question around the Fab Four: How the hell did they do it? – Robert Baird