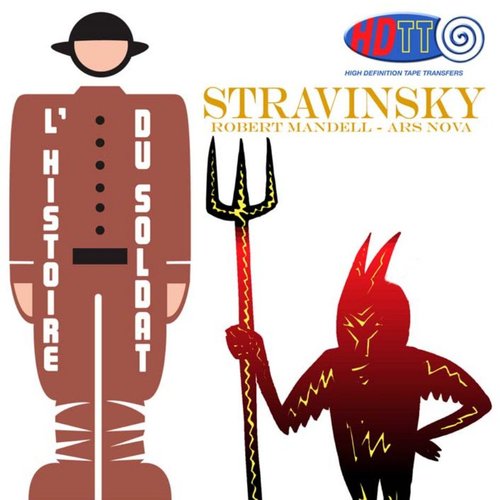 First, a word: If you are a music listener who appreciates the sound of a recording as well as the performance, or if you are an audiophile who appreciates the sound above all, you might want to audition this disc. Indeed, if you are an audiophile by virtue of the megabucks you’ve spent on your playback system, you’ll need to get this disc, if you don’t already own it. Not to have it in your collection is reason enough to turn in your audiophile badge and go back to music listening on earbuds. Sonically, this is one of the handful of best recordings I’ve ever heard on CD. More on the sound in a moment.

Let’s talk music. Russian-born composer Igor Stravinsky (1882-1971) wrote the music for C.F. Ramuz’s parable L’Histoire du Soldat (The Soldier’s Tale) in 1918. The composer meant for the theatrical work “to be read, played or danced” by a small company of performers, but it actually works best as conductor Robert Mandell and the Ars Nova ensemble play it, instrumentally without dance or dialogue. The story it tells concerns a soldier trading his fiddle to the devil for a book that can predict the future and provide him his fortune. If you know the Faust legends, you can guess where that gets him.

Stravinsky scored the work for seven players, and here the Ars Nova septet features Stanley Drucker, clarinet; Cyrus Degal, bassoon; David Jandorf, trumpet; James Thompson, trombone; Morris Lanz, percussion; Herbert Sorkin, violin; and Reuben James, double bass. The music itself is more than a tad on the jazzy, raucous, Raggedy Annie side, typical of so many “modern” compositions of the early twentieth century. However, there is an infectious forward pulse to the music and some scintillating rhythms that the Ars Nova group are quick to exploit with their own slightly raucous, Raggedy Annie jazz style.

In addition to the Stravinsky piece, which lasts a little under half an hour, we get Rossiniana by Italian composer Ottorino Respighi (1879-1936). As the title suggests, Rossiniana is an orchestral adaptation of works by Gioacchino Rossini (1792-1868), Respighi basing his four-movement suite on a number of fairly obscure Rossini piano pieces. The lushly Romantic compilation for orchestra is in stark contrast to the jazzy, small-scale Stravinsky piece. Although Rossiniana is not great music, and despite its being occasionally dark and somber, it can also be quite radiant and easy to digest; and with Robert Zeller and the Vienna State Opera Orchestra, the performance sounds smoothly polished and richly rendered.

Now, about the sound, particularly in L’Histoire du Soldat. When you listen to music recorded as well as this is, you probably don’t figure its engineers recorded it over half a century ago. But HDTT transferred the music to HQCD from a 2-track Westminster Sonotape originally made in 1956. Yes, 1956. It makes a person wonder if there have been any significant advances in sound reproduction in the last fifty years, digital 5.1 this or lossless 7.1 that notwithstanding. But back in 1956 the home-stereo industry was in its infancy, and audio engineers were doing their best to capture everything the new medium had to offer. As things went on, record companies would begin cutting corners, using far more microphones, limiting the dynamic range and frequency extremes, and editing the final sound of their recordings after the fact on mixing consoles. What a joy to go back to a sound that actually approximates a live occasion in every way.

What we get in the Stravinsky piece is excellent in every way, particularly in the localization of instruments. Is it fair, though, to compare a recording of only seven instruments to one of a complete orchestra? Maybe not, but that doesn’t discount the fact that the recording provides a reach-out-and-touch-it realism that is hard to resist. Every instrument is well defined, the highs extended, the bass going through the floor, the midrange as revealing as possible, with no sign of edge, distortion, or strain anywhere. However, it’s the transient response that handily wins the day, and if your speakers can reproduce the notes without too much overhang, you’ll hear some of the most crisply articulated sound from any disc around. All the instruments have such a sense of lifelike accuracy about them, you’ll be hard pressed to tell them from the real thing. The violin tone, the trumpet, and the percussion are especially thrilling.

The Respighi/Rossini music, recorded in 1964 and transferred to disc from a Westminster 4-track tape, is likewise good, the orchestral sound refined and expansive, among the best of its kind, if not quite so drop-dead gorgeous as the Stravinsky. Defects or drawbacks in either transfer? One might notice an occasional small pop here or there and a touch of momentary pre-echo, yet they are so minor as to be practically inconsequential. The Stravinsky and the Respighi tracks reflect audio quality of the highest order, a disc for all seasons…or all listeners as the case may be.

For further information on the various formats, configurations, and prices of HDTT products, you can visit their Web site at http://www.highdeftapetransfers.com/storefront.php.