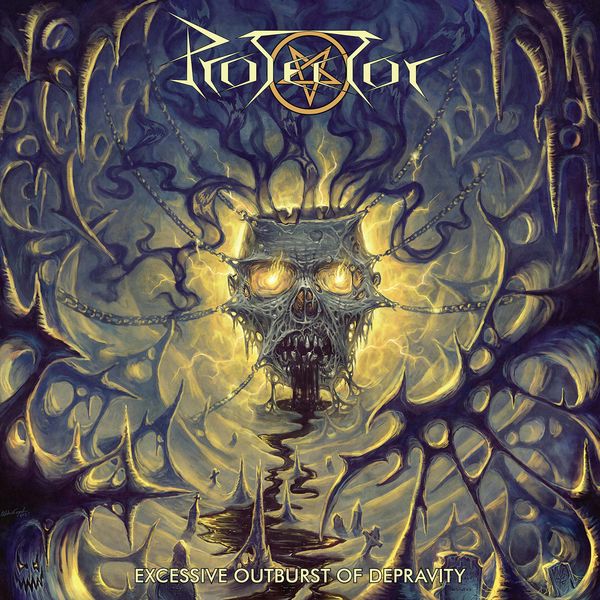 In the pantheon of Teutonic thrash, Protector occupies a somewhat interesting place. On one hand, they’re a truly oft-unsung and overlooked outfit, rarely if ever mentioned alongside the Holy Trinity of that particular scene, or even beside Tankard. On the other hand, they aren’t exactly an unknown quantity, merely one lurking just beneath the surface and ready to be (re-)discovered and given a due they’ve never quite gotten hold of. For whatever reason, they’ve been stuck in the shadows of giants for their entire existence, even with a discography that certainly merits attention.Reforming in 2011 behind original vocalist Martin Missy (and with no other original members), this latest version of Protector pretty much picks up where the first one left off. Treading the more extreme end of thrash, their particular brand of mayhem falls between the more technical edges of Kreator, the frantic ferocity of Destruction, and the death metal that spun off from both of those. Three decades later, Missy’s voice is still a throaty growl, clearly intelligible even as he never approaches anything anyone would consider “melodic”; the riffs are still fiery, the tempos frantic but still tightly controlled, the arrangements shifting between riffs and sections constantly but never jumping into tech-thrash territory. The production values are dry and sharp, albeit perhaps a little too much so, leaning into that crisp thrash sound that eschews low-end in favor of midrange clarity. That dryness is Excessive Outburst’s only potential quibbling point — everything else is Teutonic thrash done properly by a band that has had plenty of experience doing just that.

After the Little Big Horn-themed opener “Last Stand Hill,” “Pandemic Misery” is the album’s first true highlight, detailing the isolation and agony (and the coping mechanisms) so many will understand from the past few years. The historical “Referat IV B 4” delves into the well-trodden thrash metal inspiration of Nazi Germany, but focuses on the bureaucrats that massacred millions from the safety of their offices, those to whom Hannah Arendt famously ascribed “the banality of evil.” The blistering “Perpetual Blood Oath” references one of Missy’s favorite topics, the “Sons Of Kain,” harking back to a song on the first post-reunion album, suitably titled “Reanimated Homunculus,” which in turn harks further back to one of the band’s earliest classics, “Kain Und Abel.” Rivaling “Blood Oath” in sheer intensity, “Toiling In Sheol” is a ripper, followed closely by the groovier swagger of “Shackled By Total Control,” a tandem proving that, while Protector is not pushing themselves outside the creative formula they established decades ago (or beyond the parameters of death / thrash as we know it), they’re certainly not losing any steam.

I hate to talk one band up while putting others down, but of the latest efforts by German thrash giants across the board, only Sodom’s most recent output has hit as strongly as Excessive Outburst Of Depravity. Destruction’s Diabolical left me disappointed (as have the few before that, although I will admit that they appear to be trending back in the right direction); Kreator landed a few punches in the past decade, but their embrace of arena-baiting, sloganeering melo-thrash undermines their ability to deliver total knockouts. There may be no surprises on Excessive Outburst Of Depravity, but sometimes, consistency is king. If you’ve kept up, the previous three Protector albums weren’t far removed from this one, in sound or execution or overall quality, and yes, while we’re laying it out there, none are quite as fierce as the first three, however many moons ago. Still, they’re consistent and consistently good, and they deserve more of the spotlight than they’ve often been given. Now four albums into this second act, Protector may not be the biggest German thrash act around, but they can take solace in knowing that they’ve released 2022’s best Teutonic thrasher thus far.