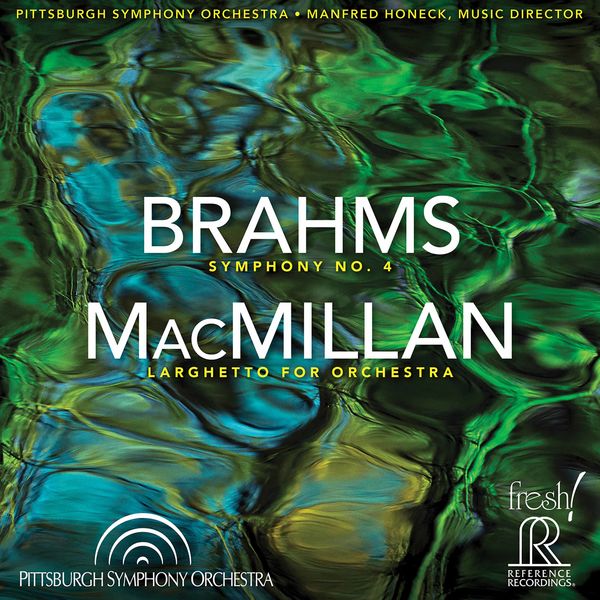 Reference Recordings proudly presents the Symphony No. 4 of Johannes Brahms, with James MacMillan’s Larghetto for Orchestra, in exceptional performances from Manfred Honeck and the Pittsburgh Symphony Orchestra. We are excited that this release coincides with the orchestra’s 2021-2022 season and triumphant return to live concerts! These works were recorded live in beautiful and historic Heinz Hall, now celebrating its 50th Anniversary season.

Since 2007, Manfred Honeck has been based in Pittsburgh and has developed an intimate relationship with the musicians of the American orchestra there, such that each of his releases on the Reference Recordings label is a distinctive, original piece of art. A true manifesto, his version of Bruckner’s Ninth (2019) was fantastic in the rude power of its colours and its furious nature; his rendition of Beethoven’s Ninth, released at the beginning of 2021, was made spellbinding by its sense for the theatrical and its biting modernity. Now Manfred Honeck and his Pittsburgh Symphony Orchestra present this strange and exciting coupling of two diametrically opposed worlds: Brahms’ Fourth (recorded 20-22 April 2018), alongside Scotsman James MacMillan’s Larghetto for Orchestra (27-29 October 2017).

Under the Austrian conductor’s baton, Brahms’ Fourth radiates an extreme polyphonic abundance; it is reminiscent of Hans Schmidt-Isserstedt’s work with the NDR Orchestra (EMI), which also shone a light on discreet exchanges, on dialogues in intermediary lines (second violins, violas, flutes, clarinets, etc). The orchestra achieves an unusual fullness here: the return of the theme (7’48) in the second movement (Andante moderato), and the path the discourse takes to its apotheosis, illustrate this. The soaring character of the following, truly giocoso Allegro confirms that Manfred Honeck’s ardent performance is free of the slightest demonstrative tendency, and that it is the truth, and so far as possible the entirety of the musical text, is what matters. Supremely tranquil and majestic, the final passacaglia is the most beautiful homage to J. S. Bach, as dreamed of by Brahms, with a polyphony that celebrates the light. A very impressive outing.

Commissioned by the orchestra in 2017 to celebrate Honeck’s tenth anniversary as music director, MacMillan’s beautiful Larghetto for Orchestra is a wide-ranging meditation. Very American in spirit, it recalls such passages as Irving Fine’s Lament or some of Aaron Copland’s slower works. The Pittsburgh Symphony Orchestra is bewitching and splendid here. – Pierre-Yves Lascar