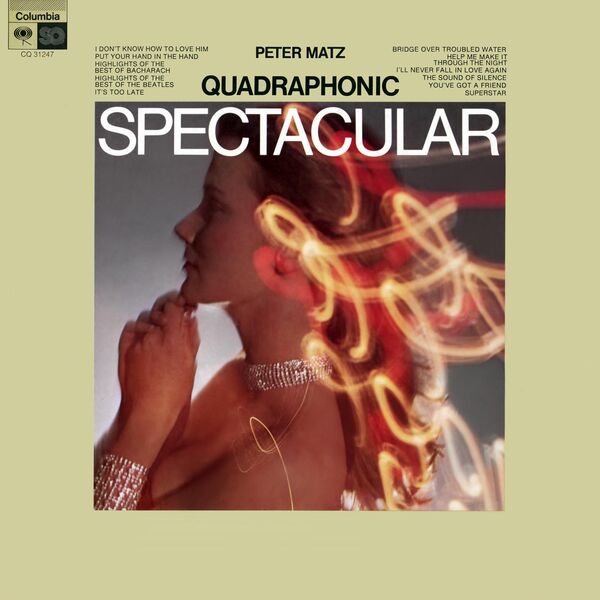 From the jacket notes (the lengthily explanation of “quad-sound” by producer, John McClure) this set would appear to be an early entry into the “four channel” market for Columbia. Good 70s light arrangements designed to give the buyer an introduction to a wide spectrum of quadraphonic pop sounds.From the back cover: Peter Matz has arranged and conducted music for television, records, Broadway, and has served as musical director for a variety of award-winning TV shows and records. Currently, he is the arranger-conductor of the Carol Burnett Show on the CBS Television Network, and he also did the recent Carol Burnett-Julie Andrews CBS TV special at New York’s Philharmonic Hall. He won a Grammy for arranging and conducting Barbra Streisand’s recording of “People” and a second Emmy for one of her TV specials (his first Emmy was for a Burt Bacharach special). Other TV credits include a stint as music director on “Hullabaloo” and four years with “Kraft Music Hall.” On Broadway, he was involved in the music of Noel Coward’s “Sail Away” and Richard Rodgers’ “No Strings.” Other recording performers for whom he’s arranged and conducted include Harold Arlen, Georgia Brown, Tony Bennett, Carmen McRae, Dionne Warwick, Kate Smith, Ruth Brown and Steve Lawrence.

With his wife and two sons, Peter Matz lives in Los Angeles where he hopes to become more deeply involved in films (he’s done three scores already) because “that’s the most fun next to recording for quad.” The photo was taken by his son Peter Z. Matz who, according to his father, “needs the credit