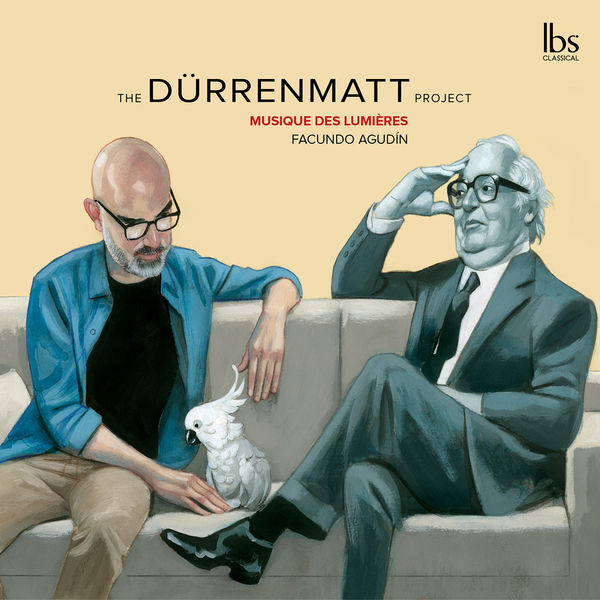 The Dürrenmatt Project is the multifaceted tribute with which Facundo Agudín and Musique des Lumières want to vindicate the figure of a protean and committed artist: from Pflüger’s thrilling tragicomedy Jedes Kunstwerk ist apokalyptisch – oder Bach und Dürrenmatt (Every work of art is apocalyptic – or Bach and Dürrenmatt) to the sardonic and imaginative score of The Minotaure by Genessey-Rappo, passing through the discourse between the atavistic and the experimental of Respiro (Breathe) by Pérez-Ramírez and the mystical and textural sonority of Stoff by Sontòn Caflisch. These four scores highlight Dürrenmatt as a writer and a visual artist; in short, one of the most authentic and respected thinkers of the 20th century.The Swiss writer Friedrich Dürrenmatt, whose birth centenary was in 2021, is the protagonist of the second instalment of the MUSIC & WORDS series proposed by Facundo Agudín and Musique des Lumières in collaboration with Ibs Classical. The ensemble, whose activity shines from the Swiss Jura, sought to pay tribute to the unfairly forgotten artist. The occasion of his centenary has seen his works return to bookshops in recent months and their reappraisal beyond the borders of his native country.

Dürrenmatt was born in 1921 in Konolfinngen. The son of a Calvinist pastor, he studied philology and philosophy at universities in Zurich and Bern and became a world-renowned German-language playwright. At the age of 26, he premiered his first play, an apocalyptic comedy entitled It Is Written (1947), which caused a great scandal and ensured his name became regularly mentioned in the context of the contemporary theatrical scene. In the text he expressed one of the hallmarks of his ideology: the constant antagonism towards the dominant values of the Swiss society of his time. He opposed the neutrality of his native country in the Second World War, considering it a tragedy that Switzerland had been a spectator of the war, becoming rich from it and even boasting of its position. The sharpness, irony and cynicism of his humour, as well as his flair for paradox, stamped his plays with an unmistakable biting and aggressive style, with which he unabashedly staged the moral dilemmas of his time. His catalogue of plays includes The Visit of the Old Lady (1956), which was even made into a film, and The Physicists (1962), a “black comedy” of scientific reflection.

Dürrenmatt also wrote for radio and film, and was a literary and philosophical essayist as well as a novelist. In the latter field he wrote peculiar detective novels for which he received prestigious prizes: The Judge and His Hangman (1950), Suspicion (1951), The Execution of Justice (1985) and The Assignment (1986), among others. In them, in addition to enhancing the power of intrigue and suspense, Dürrenmatt delves into the paradoxical psychology of policemen, judges and criminals, as well as into the very metaphysical essence of justice. He was capable of creating and supporting a complex world with just a few tormented characters who develop their plots against a contemporary historical background, usually with political implications. His prose works The City (1947) and The Tunnel (1952) also stand out. Moreover, since he was a child, he used painting as a means of expression. He illustrated some of his works and made sketches and scenography for some of his theatrical creations. “I stand neither on the left nor on the right, but across,” the always sceptical Dürrenmatt used to say. He died on 14th December 1990 in Neuchâtel in western Switzerland, where he had moved in 1952.

On 22nd November of the same year he delivered a famous testamentary speech in Zurich, reflecting on the pessimism and tragic vision of his thinking along the lines of Samuel Beckett or Eugène Ionesco. Under the title Switzerland – A Prison, he insisted on the ambiguity of his native country as a “prison” built by its inhabitants to make themselves feel safe and, at the same time, as a refuge of freedom. After his death, his house was converted into a museum, the Dürrenmatt Centre, which was opened in 2000. This CD brings together four scores created in his memory.