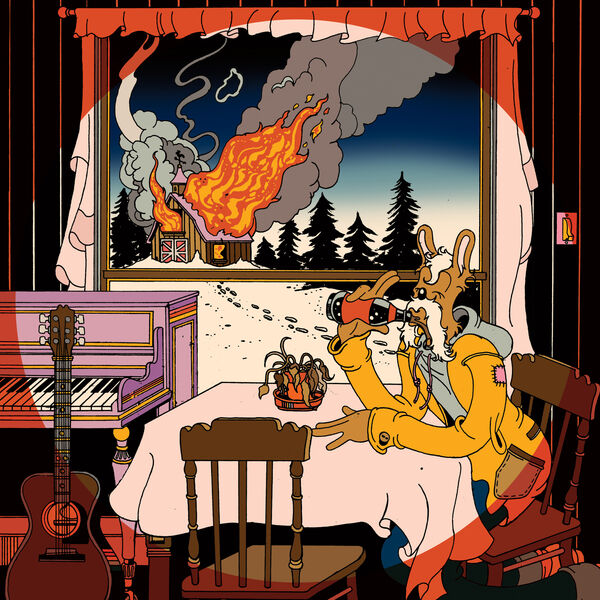 Today, instrumental outfit North Americans have released the Lost Tracks (2018-2019) EP, out now via Third Man Records. Though the songs on the EP were written and composed over the course of 2018-2019, they serve as an insightful preview to the as yet unannounced North Americans LP to follow next year.

“Lost Tracks is a collection of songs written and composed over the course of 2018-2019.All but one song comes from a three day recording session with Morgan Fox and engineer Patrick Mills at Patrick’s studio in Sacramento, CA. Morgan is an incredible artist behind projects So Stressed and Blank Gloss (alongside Patrick). I had long been a fan of Morgan’s work and it was a dream to work with him on this collection of songs.

My earlier records (NO_NO and Legends) were much heavier musically. Making more abrasive but somewhat accessible music has always been something I strived for and I had a ton of admiration for the music Morgan made to this end.

The sessions in Sacramento were completely improvisational. We sent some ideas back and forth before I made the trip up – but nothing that was actually recreated or used during our time making the record. We quickly developed a formula for the songs around the foundation of guitar, piano and walls of noise. We wanted to make some beautiful drones with a heavy bent. We essentially made an entire albums worth of material that week – with the intention of finishing it up overtime. We even had album art made back in 2019 via constant collaborator Brian Blomerth. Generally though, there was no real rush as I had JUST put out a record.

During this general timeframe, I was constantly working on new material – trying to figure out what direction the project might go musically after Going Steady. I really liked the idea of every record being a pretty big departure from the last. Amidst all these experiments, I also started working with Barry Walker Jr. on the music that became Roped In.

Ultimately, as Going Steady took on a little bit of life and the music that became Roped In crystallized, much of the other music I had been working on alongside was shelved in the short term.

Morgan always stayed in touch through our musical pursuits and over the years tinkered on this very music. I ended up very heavy-handled mixing a couple of the songs, slowing and mangling them further.

To me this music is a testament to my favorite thing about making music – collaboration. I am really happy with what we cooked up in just a few days time. A very important tenant of the project that is North Americans – is to not be overly precious with the music. I never want to belabor the process and think there is a lot of beauty in releasing something that captures a really specific moment without much micromanagement.”