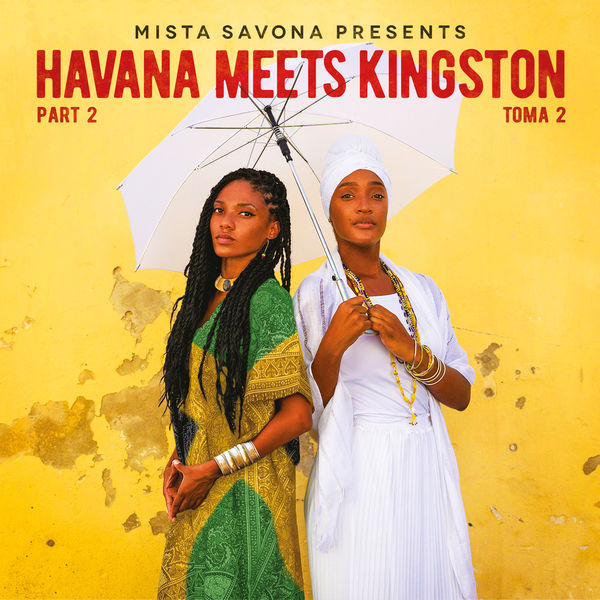 An epic set of 15 tracks, Havana Meets Kingston Part 2 unites the deep roots grooves of reggae, dancehall and rocksteady with the scorching soul of Cuban son, timba and salsa.

It took an Australian to bring these two musically rich cultures together. Melbourne producer and musician Jake Savona had already fallen in love with the music of Jamaica, having released a string of successful reggae and dub albums under his stage name Mista Savona since 2007. He first traveled to Cuba in 2014 and on his last day in Havana, he was struck with a vision: he could imagine the sounds of Cuban rumba mixed with Jamaican nyabinghi, the spiritual & folkloric styles unique to each island.A year later, supported by a grant from the Australian Council, Savona returned to Cuba, joined by a quartet of Jamaican legends including Sly & Robbie (drummer Sly Dunbar and bassist Robbie Shakespeare), guitarist Winston “Bopee” Bowen (known for his work with Dennis Brown) and Studio One percussionist Bongo Herman. They spent the next ten days at the legendary EGREM studios recording with many of Cuba’s top musicians and vocalists. “It felt like a project that wanted to be born, and I was the one lucky enough to be in the right place at the right time,” recalls Savona.

More sessions followed, other guests were invited, and after years of painstaking effort, the first volume of Mista Savona Presents Havana Meets Kingston was released in 2017 to worldwide acclaim. By 2018 a live version of the project had performed three world tours, culminating in an incendiary show for the BBC Proms at The Royal Albert Hall in the summer of 2018.

Shortly thereafter Savona was back in the Caribbean to work on new recordings with a range of famous and rising stars in the Cuban and Jamaican music scenes. Much of this new record was also recorded at the famous EGREM Studio (Estudios Areito 101) in Havana, where the equipment and atmosphere has remained unchanged since the 1950s. This is the very same studio in which the famous Buena Vista Social Club album was recorded in 1996, and the Havana Meets Kingston albums share that unique sonic character and warm, woody room sound that EGREM is famous for. According to Savona “The Cubans told me an angel lives in the studio and that she blesses the music recorded there – and I believe it! Other studios we recorded at include Nelson’s Studio in Vedado, and Bob Marley’s Tuff Gong studio in Kingston, Jamaica.”