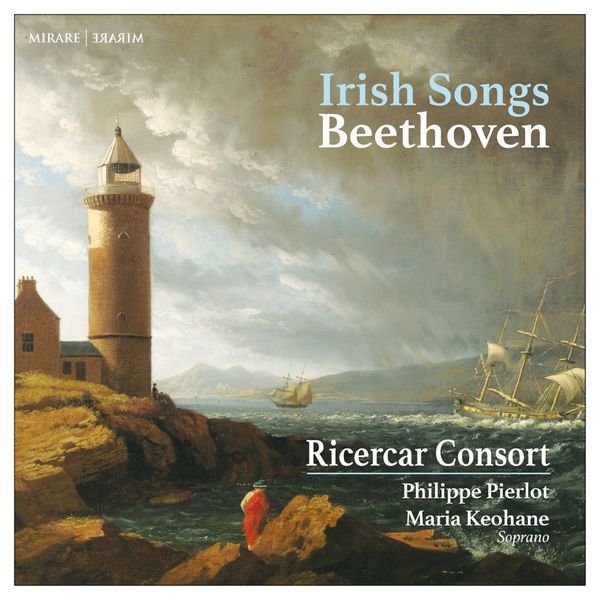 This recording includes an excellent selection from Beethoven’s many settings of Irish folksongs, with imaginative new arrangements of his accompaniments, rescored for more traditional instruments than the original piano, violin and cello.

His settings are interspersed with more conventional versions of Irish and Scottish folk tunes taken from other sources. These help to highlight his remarkable ingenuity, which preserves the original character of the folksongs while elevating them to a much higher level of interest.

“Sweet Erin, lov’d Erin, the pride of my song; still brave be the sons, and still fair be the daughters”, sings Irish-Swedish soprano Maria Keohane in one of the Irish Songs set to music by Beethoven and largely arranged by Philippe Pierlot, who also conducts his Ricercar ensemble, while also singing a few of the melodies himself.

Not a lot of people know that Beethoven was an excellent arranger of popular songs. This production, which is very different from the rest of his work, includes one hundred and seventy-nine arrangements of Scottish, Irish and Welsh songs made at the request of a Scottish publisher who wanted to bring together the most beautiful British melodies. Subsequently, Beethoven expanded this work with melodies from all over the continent. Originally conceived with piano accompaniment with the additions from violin and cello, they are presented here with instruments closer to the folk traditions in which they originated.

Beethoven obviously went much further than merely arranging harmonies, and wrote preludes and postludes of his own, which matched the spirit of the melody at hand. In this refreshing album, Beethoven/Pierlot arrangements are interspersed with traditional melodies found in other collections. This diversity of approach to this folk music is judiciously reproduced by Maria Keohane and the musicians who surround her, giving this ancestral music a tone of poignant nostalgia. – François Hudry