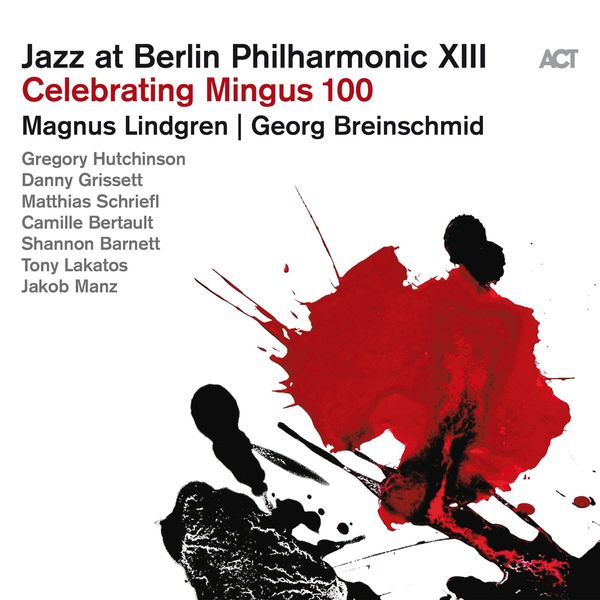 The centenary of the birth of Charles Mingus, in April 2022, has served to reinforce his importance in twentieth-century music. His “achievements surpass in historic and stylistic breadth those of any other major figure in jazz.” (New Grove Dictionary). Mingus could be angry, even violent, but also loving and tender, and all of these aspects of his complex character are reflected in his music. As he once said, “I’m trying to play the truth of what I am. The reason it’s difficult is because I am changing all the time.”Extremes of emotion are the very truth and core of Mingus’s music, and they are reflected in the six compositions by him heard here, on “Jazz at Berlin Philharmonic – Mingus 100”. The concert was one of the main events marking the centenary and took place on 13 April 2022 in the concert series curated by Siggi Loch. This album is a live recording from that concert. At one level, it was ‘just’ a concert. There were no protests. No basses or chairs were deliberately broken. Nobody took a shotgun and aimed it at a lightbulb. And yet, as is clear from this recording, the nine musicians who appeared on stage at this concert – and who mostly did not know each other before this project – each threw her or his whole musical essence into this project, while staying true to Mingus’s spirit and to his unique way of expressing defiance and dissent.

The first musical sounds to be heard on the album come from Austrian bassist Georg Breinschmid (b.1973). One of the co-leaders of the project, he juxtaposes forthright attack and caressing tenderness in the Mingus manner as his bass introduces Mingus’s “Jelly Roll”. “Georg is a wonderful communicator and one heck of a bassist,” says the other co-leader, Swedish reedsman Magnus Lindgren (b.1974). Breinschmid’s story is remarkable. Until the age of 25, he had followed a traditional path. As a young, top-flight classical double bassist, he had already become a full member of the Vienna Philharmonic, a role carrying lifetime tenure. He then turned his back on that world, and has pursued his own way as a musician rooted in jazz and Viennese popular music ever since. His passion for Mingus came early, and has remained with him. “As a fourteen year-old just starting on the bass, I remember loving the sound, the compositions, the whole package. It comes at you from so many sides,” he says.

Breinschmid and Magnus Lindgren had not worked together before, but their mutual understanding and respect grew as they did. “Magnus is a great musician!” says Breinschmid. “An amazing virtuoso multi-instrumentalist, an expert arranger – simply a great artist. He always keeps a sense of the whole ensemble in his eye, and of how it’s going to work best.” Lindgren, better known on higher winds and flute, is to be heard here mainly on his vintage Selmer baritone saxophone, and also on bass clarinet. Lindgren was also drawn to Mingus’s compositions early on, his involvement strengthened by a close collaboration with Steve Slagle, a guiding light of the Mingus Big Band in the 1990’s. As regards the Swede’s instrumentalist role here, he simply says: “I love Pepper Adams – and it’s fun to play baritone.”