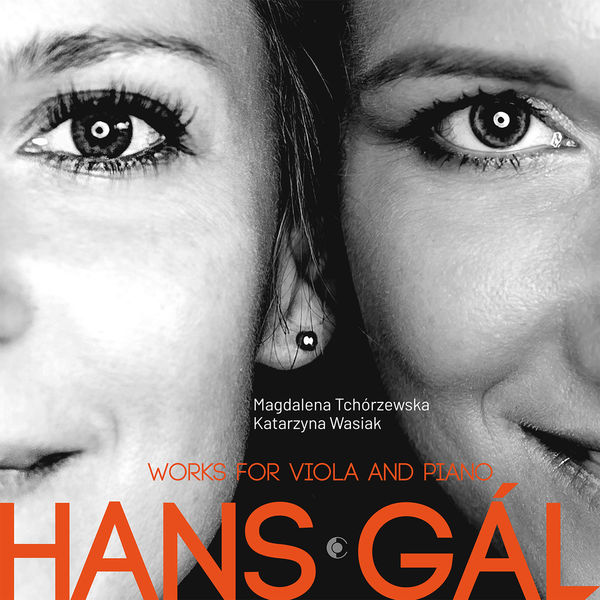 The album “Hans Gál works for viola and piano” (RecArt 0045) performed by Magdalena Tchórzewska (viola) and Katarzyna Wasiak (piano) contains the only surviving compositions for viola and piano by H. Gál – an Austrian composer at the turn of the 19th / 20th century, a distinguished Viennese and J. Brahms, a lover of F. Schubert’s melodies, as well as J.S. Bach, referring in its style to the complex harmonies of modernism of the beginning of the 20th century. Music on the CD, composed during the composer’s stay in England in the 1940s, appear for this instrumental viola-like instrument, with the accompaniment of a voice in the equatorial unified dialogue. The work of the composer, which from 1933 to create the “degenerated” category only for years, was reborn anew. This album is the result of many years of cooperation and the artistic activity of discovering and expanding the music of forgotten composers.Hans Gál was born in Brunn am Gebirge near Vienna in 1890, as the son of a Hungarian doctor of Jewish descent. His musical talents were recognised early and he received piano lessons from one of the leading teachers in Vienna, Richard Robert. Alongside a teaching appointment at the New Conservatoire, he also studied musicology under Guido Adler at the University of Vienna and composition under Eusebius Mandyczewski, who had belonged to Brahms’ circle of friends. Already as a young composer, he won the Austrian State Prize for Composition in 1915.

The First World War left Austria politically and economically in ruins and was a decisive break in his career. Gál was called up for military service, but he continued to compose. The First String Quartet and his first comic opera “Der Arzt der Sobeide” were composed during this difficult time. After the war, in 1923, his second opera “Die heilige Ente” was successfully premiered under Georg Szell and was later performed in some twenty opera houses. Following his international successes Gál was appointed Director of the Conservatoire in Mainz in 1929. The next years were amongst the happiest and certainly most active in his life. But the Nazi occupation in March 1933 brought instant dismissal from his post and a ban on all publication and performance in Germany. He returned to Vienna, where he managed to survive on private teaching and occasional conducting and editing work. In March 1938, after Hitler’s annexation of Austria, Gál and his family fled to England, with the intention of emigrating to America.

They first moved to London, but the family were unable to obtain work permits. Sir Donald Tovey, Professor of Music at the University of Edinburgh, managed to obtain a visa to provide Gál with six months’ temporary work cataloguing the Reid Music Library. Shortly after the outbreakof the Second World War in 1939 the family moved to Edinburgh, which was to become Gál’s permanent home.However, 1940 was the next big turning point for him. With the wartime measures against „enemy-aliens”, Gál was arrested and interned in successive prison camps: in Donaldson’s Hospital in Edinburgh, then in Huyton near Liverpool and finally on the Isle of Man. During this intensely insecure time he wrote a diary, which was posthumously published*andgivesvivid insight into the conditions in such an internment camp. In 1945, afterthe end of the War, Gál finally obtained a lectureshipat the University of Edinburgh. He was one of the key figures in helping to establish the Edinburgh International Festival andremained in this city until the end of his life.

After the Second World War a radical change occurred in modern music, and even though Gál wrote several more large-scale works, solo pieces and chamber music, he never re-established his former position. He became better-known not as a composer, but rather as a scholar and teacher – he wrote books on Brahms, Schubert, Schumann, Wagner and Verdi. Nevertheless, he had left a legacy of around 140 published works. Although a majority of them were composed in Britain, his cultural identity remained in the Austro-German tradition. His style draws on many different strands of that tradition: the clarity, wit and formal mastery of the 18th century Viennese classical composers. A Schubertian love of melody, Romantic intensity combined with emotional restraint, a polyphonic texture, as well as the harmonic complexity and advanced tonality of early 20th century modernism.**

Throughout his life he received many honours, among others: doctorates from Universities in Edinburgh, Vienna and Mainz, the highest state honour from his native Austria, as well as the ‘Litteris et Artibus’ for serving the arts, and Order of the British Empire from Queen Elizabeth herself. Despite winning such major awards, Gál never managed to regain the popularity he had had before 1933. He died in October 1987 at the age of ninety-seven, with much of his work unknown and rarely performed. However, in the wake of the recent revival of awareness of the music banned by the Nazis as ‘entartet’ (‘degenerate’), the last years have seen signs of an increasing interest in his work, which has resulted in numerous performances, recordings and publications. Nevertheless, Gál’s large output still awaits the attention and recognition it deserves.