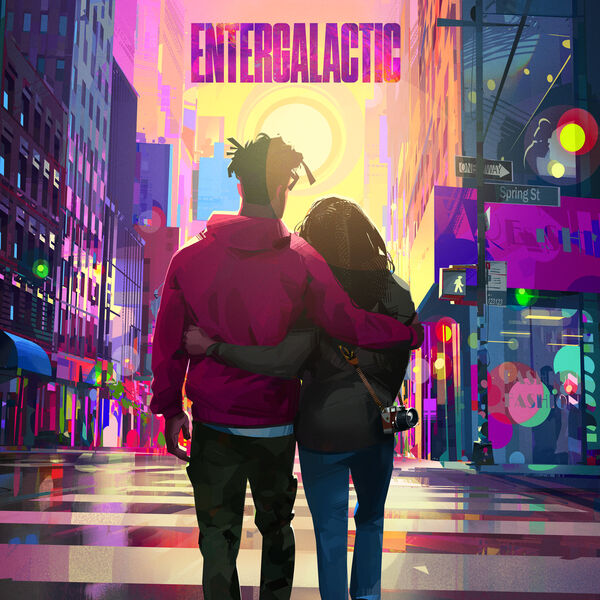 Entergalactic is the eighth studio album by American musician Kid Cudi. The album was released on September 30, 2022, as the musical component to Cudi’s adult animated special of the same name. The album was initially announced in a 2019 press release revealing an animated music series created by Cudi for Netflix, alongside American film and television writer Kenya Barris, with the album to be issued alongside the series. The dual projects would later be delayed into 2022 in favor of Cudi focusing on the release of Man on the Moon III: The Chosen (2020).

The album includes production from high-profile record producers such as Dot da Genius, Plain Pat, and Take a Daytrip, among others. Additionally the album features guest appearances from Ty Dolla Sign, 2 Chainz, Steve Aoki and Don Toliver.On the ambitious Entergalactic project, rapper Kid Cudi not only wrote and starred in his own film, he also crafted a worthy soundtrack of the same name. Technically his eighth studio album, Entergalactic features all of Cudi’s familiar calling cards — melodic humming, sing-rap delivery, and trippy atmospherics — which makes the effort enjoyable on its own. However, stopping at just the album would be a disservice to the movie, a visually striking romantic comedy that amplifies this music with its charm and endearing warmth (with plenty of background Easter eggs for the Cudi diehards). Paired with the highly stylized animation and outer space scene-scapes that pull viewers in and out of modern-day Manhattan, Entergalactic is one of Cudi’s most engaging listens, boosted by a balanced blend of hedonist club anthems (“Can’t Believe It” with 2 Chainz, “Do What I Want”), ethereal instrumentals (“Entergalactic Theme”), and lovelorn yearnings (“Angel,” “Ignite the Love”). In addition to 2 Chainz, the set also features Don Toliver (“Somewhere to Fly” and “Burrow” with Steve Aoki) and Ty Dolla $ign (whose animated character Ky bears quite a resemblance to the real-life musician). While viewing the movie isn’t required, it’s highly recommended, if only to experience the full scope of what Cudi has accomplished here. Entergalactic is a late-era gem in his catalog, a multimedia gift to fans that expands his artistic scope and bodes well for more projects outside the confines of music. – Neil Z. Yeung