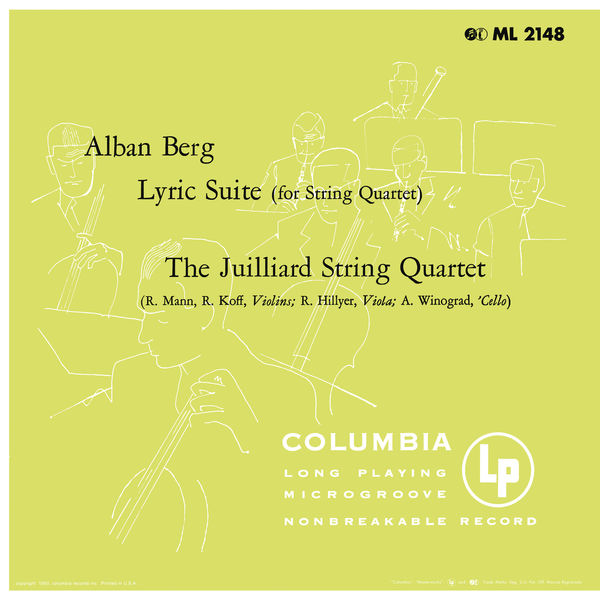 Sony Classical releases Juilliard String Quartet – The Early Columbia Recordings: Sony Classical is excited to present a newly remastered selection in 24bit of the earliest albums of this august American ensemble. Made between 1949 and 1956 in Columbia’s studio on Manhattan’s 30th St., these landmark recordings are mostly new to listeners. The albums are mastered from the original tapes in sampling rate 96kHz and 192kHz.When William Schuman founded a string quartet at New York’s Juilliard School in 1946, he envisaged an ensemble not only to teach the elite New York conservatory’s students but also, in its own public performances, to “play the standard repertoire with the sense of excitement and discovery of a new work and play new works with a reverence usually reserved for the classics.” From its first appearances in New York, the Juilliard String Quartet was identified as a champion of modern music. Its first recordings for American Columbia, all included here, were dedicated to the works of Alban Berg and Béla Bartók (only recently deceased), as well as to Arnold Schoenberg (still very much alive), and to active American composers including Schuman himself.

When the recordings of new American quartets were first released in the mid-50s, High Fidelity’s reviewers enthusiastically took up the cudgels for them, writing: “William Schuman’s fourth string quartet is a big, serious, robust work, rather involved in form, rich in harmonic color, but especially rich in the variety and originality of its rhythms.” “[Leon] Kirchner’s quartet has the accent of urgency, power and overriding imaginativeness one associates with Béla Bartók’s compositions for the same medium … The work has its own immensely individual profile. One feels it is music that had to be written, and one feels behind it the mind of a great composer.” “The [Irving] Fine stands out for its fantasticality, its highly dissonant texture, and its individual formal devices; it employs the 12-tone system within a freely tonal framework.”

Featuring works by Mozart, Ravel, Webern, Milhaud, Copland, Peter Mennin, Alexei Haieff and Andrew Imbrie, are three discs containing the premiere of Béla Bartók’s six quartets on records, which were set down in 1949. They appeared on LP and 78s the following year, bringing the Juilliard String Quartet its first real celebrity. Recorded on 78-rpm shellacs rather than on tape, this path-breaking set thus consists of live, unedited performances. When reissued some years ago on CD – the only portion of the new Sony Classical box set ever to have appeared before on silver discs – it was rapturously praised in Fanfare magazine for “its joy of discovery, which remains completely fresh and vivid” even though numerous other traversals of the Bartók cycle had appeared in the meantime, including two stereo remakes by the Juilliard itself – in 1963 and, with digital technology, in 1981. Fanfare continued: “The ensemble deserves its renown in Bartók, whom it approached … with warmth and sometimes even Romanticism. Its impeccable execution set a new standard.”

Another Juilliard milestone was the premiere of Arnold Schoenberg’s four quartets on records, set down in 1951–52. Reviewing the original LP release, High Fidelity called these performances “vital, authoritative … The soprano, Uta Graf, does wonders with the extremely difficult songs of the second quartet, and her voice has been integrated with the strings to create the kind of unity Schoenberg must have dreamed of but could seldom have heard.” At last, all these historic Juilliard String Quartet recordings are available to today’s music lovers.