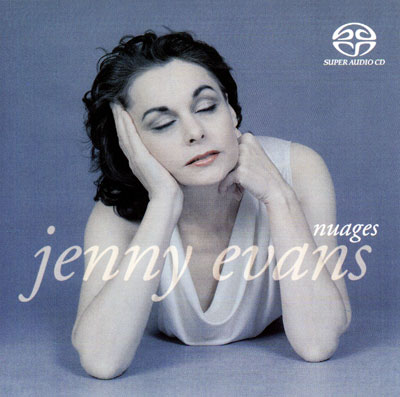 Hailing from Beckenham, Kent, England and now living in Munich, Germany, jazz vocalist Jenny Evans has achieved a great deal. She once graduated from the university with an M.A. in linguistics, has run her own jazz club, worked as a lyricist and an actress, took part in countless radio and television productions, was a featured singer in stage musicals and has given concerts all over the world. While experienced also in trad jazz, R’n’B and pop, Jenny Evans has been making a name for herself as an irresistibly charming swing vocalist in the tradition of Ella Fitzgerald and Anita O’Day. Yet following the big success of her last album “Gonna Go Fishin'”, the time came for her to think about her own identity and remember her European roots. An educated choral singer (whose first love was the contrapuntal motets of Orlando di Lasso) and former piano student of Trevor Pinnock, Jenny Evans pays homage to the European legacy on her new album “Nuages.”

Opening up her book of personal favorites, Jenny Evans found a great variety of song material waiting for her sophisticated vocal approach. The repertoire on “Nuages” includes an Elizabethan lute song by John Dowland, a Baroque aria by Henry Purcell, a Swedish folk song, a Beatles tune by George Harrison, a hymn in Latin by Carl Orff, a 30s-pop song by Peter Kreuder, a great torch song by Noël Coward and original tunes by European jazz artists Django Reinhardt, Dusko Goykovich and John Dankworth. Despite this heterogeneous repertoire, Evans and her well-chosen band come up with an original aesthetic conception that is at the same time passionately intimate and delightfully relaxed. Mulo Francel, known for his tasteful work with Quadro Nuevo, delivers some great emotional moments on several reed instruments while Walter Lang again proves his inimitably delicious artistry on the piano. In her subtle and swinging way Jenny Evans has succeeded in crossing boundaries and creating a marvel of dramatic and intense feelings that enrichens the world of music.