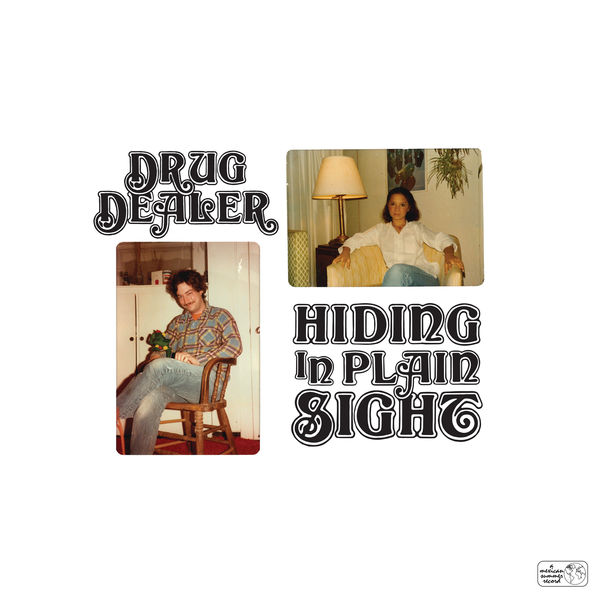 The third and most seasoned Drugdealer album, Hiding In Plain Sight, almost didn’t happen at all. Frustrated and insecure with his own singing voice prior to the pandemic, Drugdealer founder and primary songwriter Michael Collins was nearly ready to throw in the towel. While attending Mexican Summer’s annual Marfa Myths festival, a chance encounter with artist and composer Annette Peacock changed his outlook. Collins says, “I told her my plight, then I played her a song, and she told me I wasn’t singing high enough for my speaking voice. When I returned to LA, I started coming up with new progressions, which I’d modulate up three half steps. It forced me to find a new way to sing.”

Taking inspiration from a canon of gruff but soulful rock vocalists like Phil Lynott, Nick Lowe, or even Van Morrison, Collins looks back on his nocturnal meanderings through LA’s warrens of bars and clubs. He’s right up front in the mix, detailing a search for love in all the wrong places. AM Gold, down-hard love songs, cosmic country and Rhodes-driven grooves result in the most joyful and fully-realized Drugdealer album to date. Hiding In Plain Sight is the sound of Michael Collins and Drugdealer getting their groove back with guests including Tim Presley, Kate Bollinger, Bambina, Sasha Winn, Sean Nicholas Savage, Video Age, and John Carroll Kirby.Seventies music is getting the respect it richly deserves. But recreating its vibe today, particularly soft SoCal rock, is a tricky trip into the past. On Drugdealer’s third album, Hiding in Plain Sight, it’s clear that Michael Collins has that era buried deep in his songwriting DNA. Collins has built this collection with the help of an impromptu conglomeration of talented friends like keyboardist John Carroll Kirby and vocalists Sasha Winn, Sedona, and Bambina. Recorded by nine different engineers in that same number of homes, cafes, and studios between 2019 and 2022, the sound is remarkably consistent, appropriately lush, and warm. Comparisons are unfair, but when the influences are as obvious as they are here, they become inevitable. Put on the opening track, “Madison,” and visions of Van Morrison singing begin to swirl in your head. “Someone To Love” will force listeners to dig for the album credits to see if Bill Withers has somehow returned. That same song’s lyrics have a lyrical turn reminiscent of ’70s AOR: “Find someone to love/ Somebody that can hold you when it’s wrong and make it right.” On “New Fascination” the tone of the guitar solo is Steely Dan’s “Do It Again” anew and “Baby” cops more than a few vibes from Blood Sweat & Tears; sax solos throughout bring Tom Scott to mind. Los Angeles-based singer Bambina coos over the Bob James-styled electric keyboard funk lite of the closer “Posse Cut.” And no collection inspired by Laurel Canyon and the environs of the City of Angels could be complete without a nod to country rock and few new songs nail the Gram Parsons/Palomino Club/Cosmic Cowboy miasma as well as “Hard Dreaming Man” where Collins gets personal. “I used to run my mouth any chance I could/ Done a lot of bad things I never thought I would,” he laments. Collins deserves credit for his high-end taste in sources as he cherry picks the cream of ’70s yacht rock as models. Happily, Collins’ music is much more than just a well-meaning tribute act—it’s clear he connects and genuinely feels that decade as if he’d been there. – Robert Baird