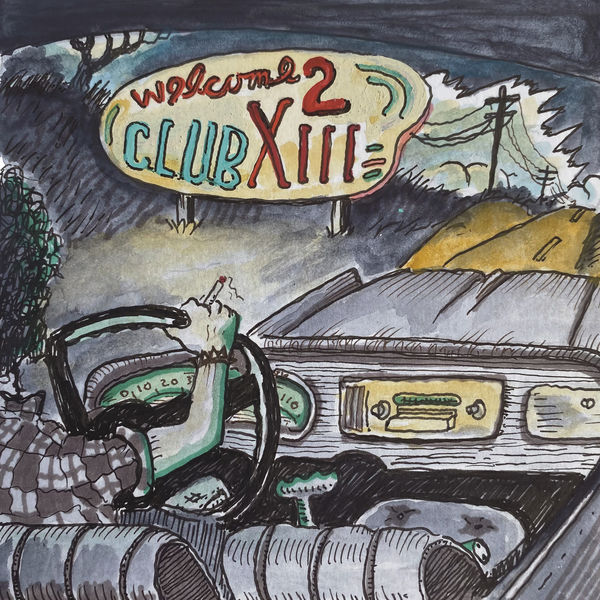 On the title track to Welcome 2 Club XIII, Drive-By Truckers pay homage to the Muscle Shoals honky-tonk where founding members Patterson Hood and Mike Cooley got their start: a concrete-floored dive lit like a disco, with the nightly promise of penny beer and truly dubious cover bands. “There were no cool bars in town and Club XIII was the best we had—but it wasn’t all that good, and our band wasn’t particularly liked there,” says Hood, referring to the vocalist/guitarists’ former band Adam’s House Cat. “From time to time the owner would throw us a Wednesday night or let us open for a hair-metal band we were a terrible fit for, and everyone would hang out outside until we were done playing. It wasn’t very funny at the time, but it’s funny to us now.” The 14th studio album from Drive-By Truckers—whose lineup also includes keyboardist/guitarist Jay Gonzalez, bassist Matt Patton, and drummer Brad Morgan—Welcome 2 Club XIII looks back on their formative years with both deadpan pragmatism and profound tenderness, instilling each song with the kind of lived-in detail that invites bittersweet reminiscence of your own misspent youth.After 26 years together and their two most recent albums filled with political and social commentary, the indestructible Drive-By Truckers, fronted by founders Patterson Hood and Mike Cooley, and including keyboardist/guitarist Jay Gonzalez, bassist Matt Patton, and drummer Brad Morgan, have here gotten personal and yes, openly nostalgic. Welcome 2 Club XIII, named for a divey North Alabama club where they started out and where, as bandleader Hood now puts it, “From time to time the owner would throw us a Wednesday night or let us open for a hair-metal band,” is a window into the band’s long journey. While the crunchy guitars and consciously southern rock sound has been rightly de-emphasized in recent years, a menacing, snarly guitar line does accompany opening track “The Driver,” a long, spoken word travelogue through Hood’s formative years finding him, “‘Blasting ‘Here Comes a Regular’ on ten/ An epiphany, a moment of clarity/ Driving all alone at 4AM.” With hindsight he now reckons, “We were already older, yet much younger than today.” While much of the music meanders with few hooks or inventive turns, the lyrics from both Hood and Cooley are particularly sharp. In “We will never wake you up in the morning,” Hood’s straining vocals effectively tell the fatalistic tale of the “narcotic splendor of your never-ending bender,” where “The heaven that awaits you is a bar that never closes” and the final wreck and ruin leaves survivors with “hearts broken by your actions but you had the best intentions.” A three-piece horn section fortifies “Every Single Storied Flameout,” a song about the example Mike Cooley set in life for his teenage son. R.E.M.’s Mike Mills provides vocal harmonies on “Maria’s Awful Disclosures,” Margo Price appears on “Forged In Hell And Heaven Sent,” and up-and-coming songstress Schaefer Llana adds an inspired vocal turn in “Wilder Days.” Longtime producer David Barbe, who has been a part of the band’s story since 2001’s Southern Rock Opera, is again at the helm. Recorded in 2021 at his Chase Park Studios in Athens, GA, Welcome 2 Club XIII has the immediacy and push that Barbe has always brought to the band’s sound. An engaging, back to the future survey of a veteran band. – Robert Baird