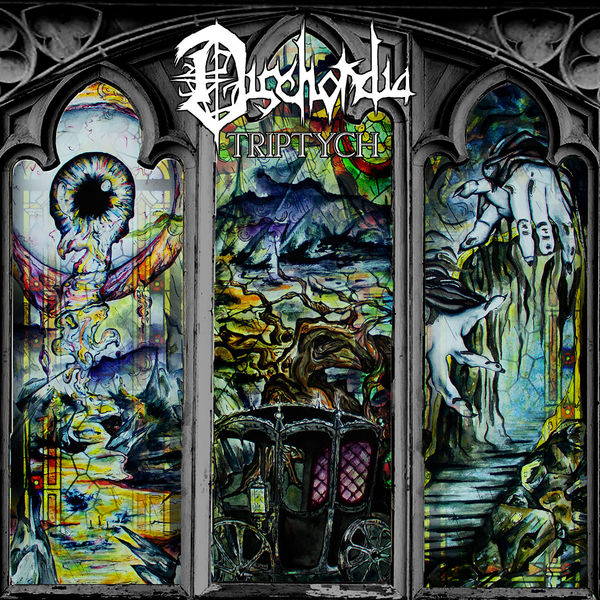 Named after The Dark Tower series by Stephen King, Oklahoma City-based trio Dischordia have been quietly evolving their music over the last ten years. The early djent(ish) deathcore formula has gradually morphed into a hybrid output, more progressive and dissonant. A Gorguts-esque approach that has placed the band in more ambitious and creatively fertile territory, suitable for those who aim to push boundaries. Dischordia’s third studio album, Triptych, is the culmination of this metamorphosis, and by far their best work to date. The mutation, begun on Thanatopsis and perfected on Binge/Purge, is now complete, and the newborn hybrid creature growls in all its splendor. A thunderous sound that grazes the edges of brutal death metal with challenging tones. As if Luc Lemay teamed up with Meshuggah and Artificial Brain, unleashing an audaciously devastating cacophony. A three-chapter sonic vortex that is as overwhelming as it is engaging and eclectic.Although the suites are self-contained, according to the band, Triptych presents a progressive narrative that travels from the cosmic to the social and inner consciousness, with the artwork representing ‘the great eye’ of the observer. A storytelling format enhanced by the various interludes that add further color and contrast to the musical narrative. These pit stops are probably Dischordia’s most differentiating element and what sets them apart from the rest of the dissonant pack, along with the subtle BDM layer. The flute section in ‘Bodies of Ash’ and ‘Spirits of Dirt’s’ interlude are among the most interesting. In fact, these two tracks, together with the opener, ‘Minds of Dust’, provide a tremendous kick-start, immediately catapulting the album into sonic stratospheres while simultaneously unveiling the overall look and feel. The cohesion between the nine songs is all too evident, exposing a common Lemay-ish narrative that never strays from the initial script. The constant dynamics that swing between slow-paced and blast beat tempos guarantee an interesting three-dimensionality, without ever diving into truly original waters. ‘Purifying Flame’ is among the finest examples of this sonic polychromy, featuring not only one of the best riffs on the album but also a contrasting jazzy interlude that mirrors the trio’s eclecticism. The lads are clearly at the top of their game and every moment on Triptych is a reflection of that. A synergy complemented by Colin Marston’s competent sound engineering that injects some clarity into this restless, multifaceted musical approach.

To witness a collective reaching its creative peak is something truly special. It is not only the culmination of a journey but the ultimate manifestation of the artistic spirit. And while it is unknown whether the trio will outdo themselves again in the future, it is clear that Triptych stands as a milestone in Dischordia’s career and a must-listen for those who enjoy sailing through dissonant, troubled waters.