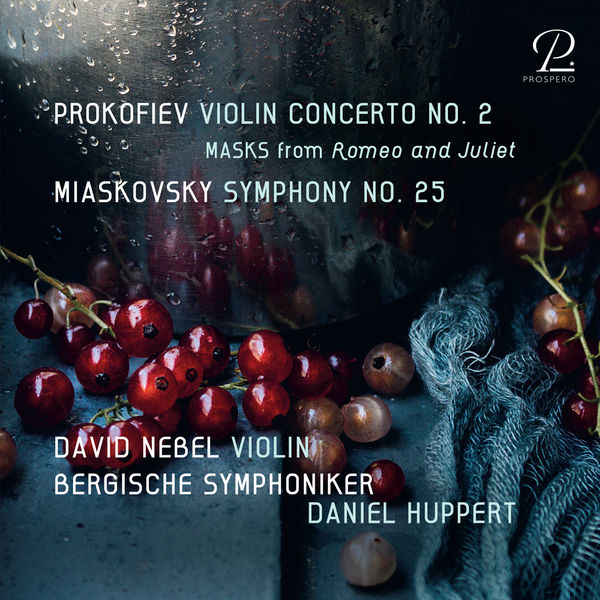 Music of the transition: An interesting compilation presented here by Daniel Huppert and the Bergische Symphoniker. The 2nd Violin Concerto by Sergei Prokofiev (soloist: David Nebel), is combined with Symphony No. 25 by Nikolai Myaskovsky. The programme is complemented by the arrangement of the piece “Masks” from Prokofiev’s ballet “Romeo and Juliet” for violin and orchestra, made especially for this recording.Prokofiev’s second violin concerto was written shortly before he moved from Paris to Moscow. It clearly traces this transition and the accompanying tightrope walk musically. While the first violin concerto still surprised with sharp dissonances and abrupt sounds, the second sounds milder and more lyrical. The clattering castanets in the last movement are reminiscent of Spain – the country in which the concerto was first performed. Despite the romantic air that wafts through the concerto, Prokofiev does not refrain from ironic elements that infiltrate the concerto: Brash brass interjections flash through in the 2nd movement and the spirited, Spanish mood of the last movement is repeatedly punctuated by dissonances

Nikolai Myaskovsky, on the other hand, was not granted the international success of Prokofiev or Shostakovich – even though his music was repeatedly praised by listeners and experts. Rarely heard, therefore, is his Symphony No. 25 in D flat major. It is his first major post-war work, the initial sketches of which he wrote down in February 1946.

Despite health problems, Myaskovsky intensified work on his new symphony in the summer and completed the orchestration in October 1946. A fortnight later, he confided to his work diary that he had put the finishing touches to his 25th Symphony. The clear, splendid, but in places veiled tonal language reflects the composer’s inner emigration. The fact that in his old age he turned more to Russian Romanticism than to modern trends may also have been part of his personality. However, the painful experiences of a composer in a totalitarian regime certainly contributed to this development. A Russian melody is already heard in the first movement. Commentators at the time wanted to recognise in it a “protyazhnaya”, a slow, melismatic dance song that was considered the essence of the Russian soul. However, it is more likely that the melody originates from a miniature of Myaskovsky’s 8 Piano Pieces from 1906, and that it is based on the songs of the Old Believers from Mussorgsky’s opera Khovanchina.

Swiss violinist David Nebel is a much sought-after soloist who combines technical brilliance with mature musicality and a distinctive tone. Highlights of recent seasons include performances and recordings with the Cape Town Philharmonic Orchestra, the Xiamen Philharmonic Orchestra, the Orchestre Philharmonique Royal de Liège and the Lithuanian National Symphony Orchestra. As a soloist, David Nebel has performed with the Baltic Sea Philharmonic under Kristjan Järvi at the Finlandia Concert Hall (Helsinki), the Mariinsky Theatre 2 (St. Petersburg) and the Estonia Concert Hall (Tallinn). Nebel and Järvi recorded an album together with the London Symphony Orchestra at the famous Abbey Road Studios in London.