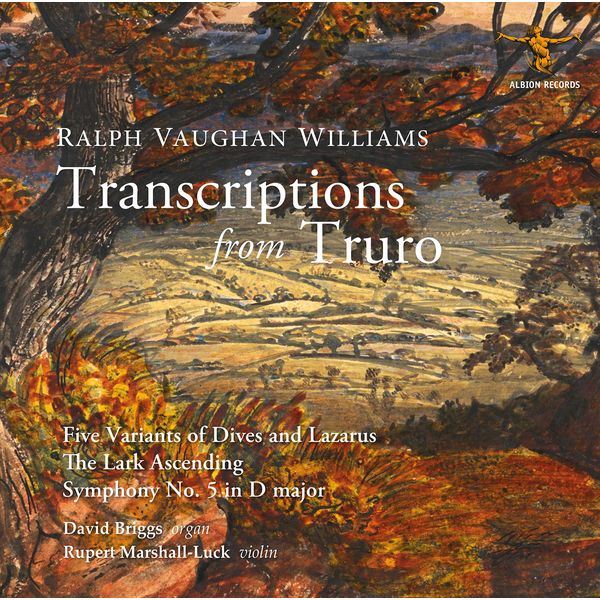 Albion Records presents an album of organ transcriptions recorded on the renowned “Father Willis” organ of Truro Cathedral in August 2021. David Briggs is an internationally renowned organist whose performances are acclaimed for their musicality, virtuosity, and ability to excite and engage audiences of all ages. David is currently Artist-in-Residence at the Cathedral of St. John the Divine in New York City.

In addition to his performing abilities, he is renowned as an arranger of orchestral works for the organ, and The Ralph Vaughan Williams Society commissioned three new transcriptions for this recording. We begin with Five Variants on Dives and Lazarus, a rhapsody developed by Vaughan Williams in 1939 around a folk tune that he loved all his life, which “came from the soil of England, ageless and anonymous”.

David is joined by the acclaimed violinist Rupert Marshall-Luck for another popular piece: The Lark Ascending. This was often performed with violin and organ 75 to 100 years ago (by violinists such as Albert Sammons, Sybil Eaton and Jelly D’Aranyi, with organists including Herbert Sumsion, Edward Bairstow and Hubert Hunt); this recording is the first modern revival of that tradition. Hailed by BBC Music Magazine for his “handsome tone and laser-like tuning”, Rupert Marshall-Luck appears as soloist and recitalist at major festivals and venues throughout the UK and internationally.

The Fifth Symphony was completed in 1943. It is, perhaps, the warmest of the nine symphonies, clearly influenced by the unfinished opera Pilgrim’s Progress, famously dedicated “without permission” to Jean Sibelius. Written in wartime, it is described as expressing “not mere resignation under disaster, but hope during adversity”. In the booklet notes, David Briggs tells us that the transcription, made at the height of the Covid pandemic, proved to be something of an emotional lifeline for him.