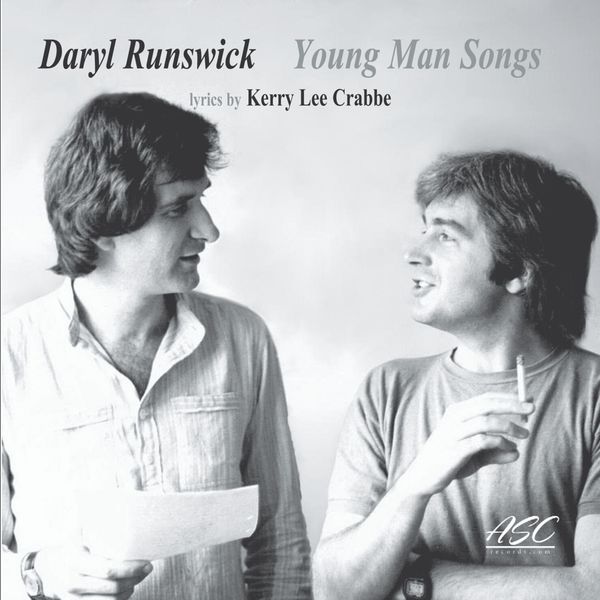 Daryl Runswick is a musical polymath, a top Jazz double bass player he has played with the likes of Stan Sulzmann, Alan Branscombe , Henry Lowther and Tony Coe to name but a few but is also a TV composer, was bassist and then pianist for Cleo Laine and Johnny Dankworth and is also a highly regarded contemporary classical composer.

In Young Man Songs we find Daryl in song writer mode, teaming up with lyricist Kerry Lee Crabbe, these songs come from the 80 when Daryl was a young man trying to sell his musical wares these are more than demos, beautifully recorded and performed, echoes of Bacharach but ultimately Daryl has his own unique musical voice. In his words, Kerry Lee Crabbe always says that in those old days, while they were doing other things ‘seriously’ for a living Kerry, playwright and screen writer (Memoirs of a Survivor, The Playboys), Daryl, jazz bassplayer, TV composer (My Family and Other Animals), arranger for The King’s Singers they were also composing with their ‘left hands’ a series of very fine pop songs, recorded at the time by various artists but collected here for the first time in versions by Daryl himself.

Engineered by the legendary John Burns (Hendrix, Clapton and on up from there) these 1982 sessions finally get a belated and welcome release.