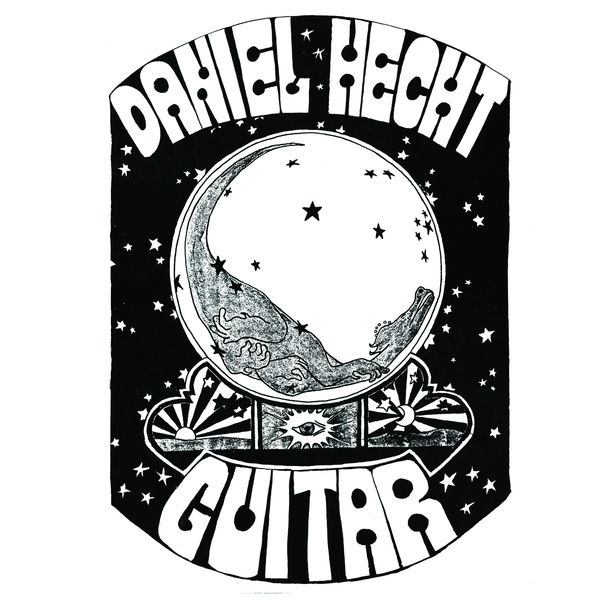 Many heavyweights feature on Daniel Hecht’s musical timeline; John Fahey gave him a leg up onto Will Ackerman’s Windham Hill label, where he befriended Michael Hedges and others, but his 1973 debut album, simply titled Guitar, is still arguably the finest example of his talents. This is pure solo instrumental acoustic guitar music, aside from a brief and unexpected cameo from piano and brushed drums on Demolition Derby. In fact, Demolition Derby is a particularly daring and aptly titled piece, moving from quickly and accurately picked rodeo-style guitar to full on acoustic noise reminiscent of Bill Orcutt or even Derek Bailey; and that’s before we move through to the saloon for the piano-led ten-second outro, complete with bonus dog bark. The rest is solo guitar and often calmer; Black Cat Lament is a beautiful piece of measured and intelligent playing, mixing slide with rhythmic picking and reminding me in its early stages of Fahey’s classic Summer Cat by my Door from his Railroad I album.

Further on, Sweet Mantra is more straight forward and again cleverly titled, it combining light higher notes with subtly repetitive playing to create a gentle tonic of a song, before Chicago, another more anarchic piece, kicks in. This one takes the gnarly beauty of the city and distils it into a spiky miniature. Seymour Volunteer Fire Dept has the easy nature of Sweet Mantra and a lovely laid back energy in keeping with its title. That said, even this one gathers sharpness as it develops and again the influence of Fahey, who was in his Fare Forward Voyagers phase when this was being composed, comes through in places. But Guitar is anything but a tribute album and its diverse sound can be heard immediately; it’s not surprising that the picky Fahey pricked up his ears and that Will Ackerman ended up signing Hecht.

Towards the end of the set is Suite in E, another appropriately titled, deep and multi-faceted piece of playing that swings from rock and roll and rhythm and blues structures through to jazz and free form. A suite indeed, this mini-epic has hints of improvisation running through it, but there is also that rolling groove underpinning it for the most part and suggesting a more deliberate composition. Fascinating stuff throughout, but particularly the final third, with sliding lower notes and sharp high picks creating a strange and slightly menacing whole, before an easy jazz rhythm sets in for the very last movement and Hecht chuckles the song to a close. Final track Pear-Shaped Piece is less mercurial but still prone to slipperiness. A mostly gentle piece in the vein of Sweet Mantra and Seymour Volunteer Fire Dept, this lovely patient song runs for over six minutes and unfolds beautifully. Hecht was (he is now a novelist after a medical condition stunted his music career) clearly a player brimming with ideas, providing a wealth of musical styles, often within the same song, and able to demonstrate the versatility and energy available from the acoustic guitar. Guitar is excellent, an enthralling, highly creative and timeless debut.