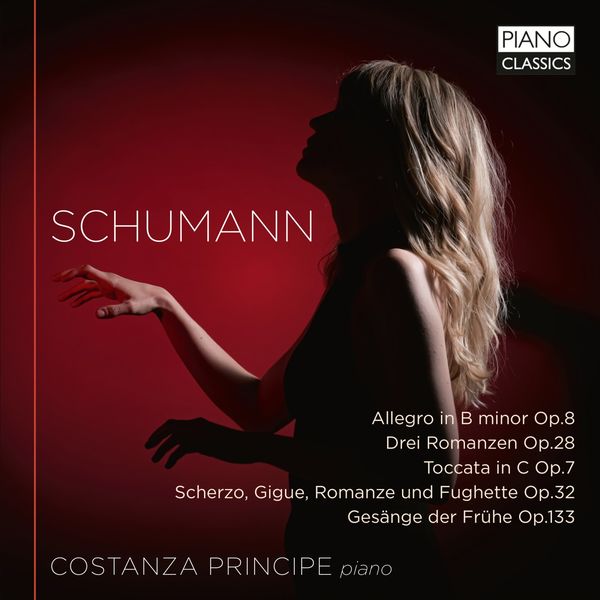 An impressive debut recording from a charismatic young pianist with a passion for Schumann. It was at a recital by Enrico Pace, hearing Schumann’s Novellettes, that the 16-year-old Costanza Principe determined she wished to dedicate her energies to the piano. She had been studying the instrument since the age of six and playing in public since the age of seven, but these still underrated pieces of Schumann set her on a path that has since taken her past degrees at conservatoires in Milan and London, and a Wigmore Hall recital debut in 2016. There is a certain inevitability to the presence of Schumann on her debut recording – and not any Schumann, a standardrunthrough of Carnaval, Papillons and Arabesques, but much less familiar pieces that test the expressive reflexes of the most dedicated Schumann interpreter. Neglected ever since Schumann composed it during his troublesome stay in Vienna (1838-1839), while away from but passionately attached to Clara, the collection of Scherzo, Gigue, Romanze und Fughette Op. 32 was curiously never performed as a set during Schumann’s lifetime.

Written in 1839, the 3 Romances Op. 28 also suffered a troubled birth, as a Christmas present to Clara – the two now engaged – but one which he did not value sufficiently to dedicate to her. Yet under the hands of an interpreter as sympathetic as Costanza Principe, these pieces surge and swell with the composer’s uniquely impassioned and vulnerable voice.

She also includes pieces from the opposite ends of Schumann’s career: the tumultuous Allegro Op. 8, a Beethovenian flexing of pianistic muscle from the 21-year-old composer; and the poignant collection of Gesänge der Frühe Op. 133, composed five months before his attempted suicide and confinement within the asylum at Endenich. “Dawn-songs”, Clara called them, “very original as always but hard to understand, their tone is so very strange”. Inflected by a world-weary melancholy, as it may seem in retrospect, but with decades of writing for the piano distilled into a new simplicity of idiom.

Costanza Principe was born in Italy in 1993 and started playing the piano aged 6. After graduating from the Milan Conservatory in 2010 cum laude she obtained her Bachelor of Music with First Class Honours at the Royal Academy of Music. She followed master classes with Franco Scala, Pascal Devoyon, Boris Petrushansky, Byron Janis, Boris Berman, Natalia Trull, Robert Levin, Alexander Lonquich and Steven Osborne. she played in many prestigious concert halls and festivals, such as Wigmore Hall in London, Verdi Hall, Puccini Hall, Milan Auditorium, Filarmonico Theatre in Verona, Serate Musicali, Ravello Festival, Steinway Hall in London and the Duke’s Hall and David Josefowitz Halls in the Royal Academy of Music.