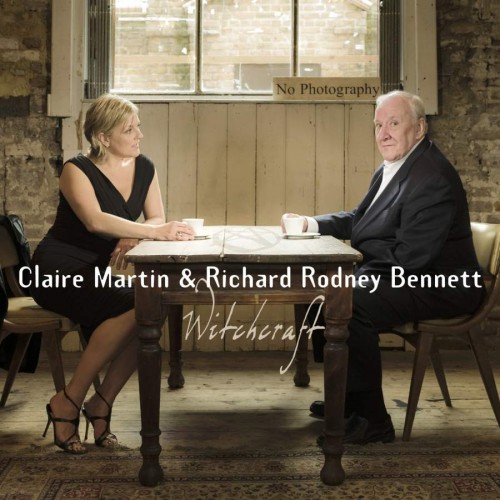 Since their first meeting in Glasgow in the early 1990s, singer Claire Martin and composer/pianist Richard Rodney Bennett have been what Martin calls ‘firm friends’, their relationship cemented by a common interest in the subtleties of songwriting and jazz singing. Witchcraft is the result of their dynamic collaboration. On this album, they perform as a (delightfully informal but consistently musicianly) duo, her intimate, deceptively unfussy vocal style perfectly complemented by his flawlessly eloquent piano. Their material is all mined from the Cy Coleman songbook.

Together, this collection weaves together the opposing talents of the sultry jazz sensation Claire Martin and the polished, savvy keyboard skills and compositional insight of Richard Rodney Bennett. Martin’s strength as one of the best interpreters of the Great American Songbook shines through in this recording. The smoky elegance of her vocal sculpts itself around the smooth flowing textures of the piano accompaniment and the occasional vocal repartee of Bennett. The result of this established partnership is mesmerising music that takes you back to a wonderful and simpler time of yesteryear.

It’s hard to believe that it was almost six years ago that they first got together. It seemed so unlikely at the time, this song-and-piano partnership between a notably feisty jazz vocalist and an esteemed composer. But now it’s accepted that their albums and shows set the standard for classic interpretations of popular songs. This time the work of Cy Coleman gets the treatment – touching, clever, beautifully poised and deceptively casual-sounding. Despite the huge success of songs such as the title number, Coleman’s name is the least well‑known of the great songwriters. This classy selection should help to put that right.