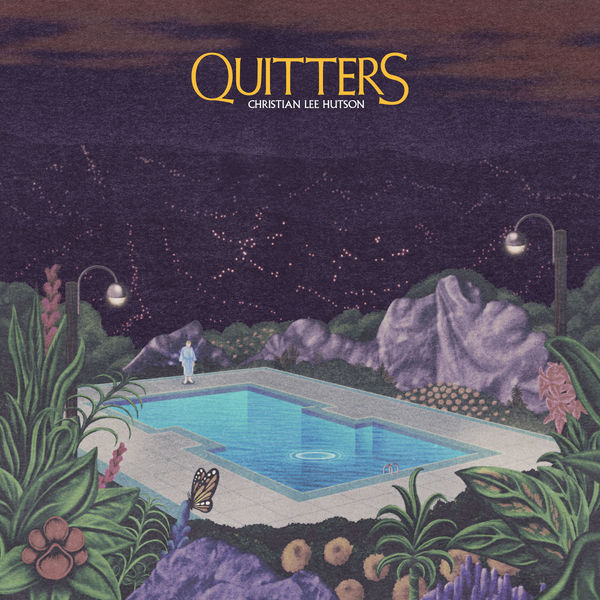 Christian Lee Hutson starts his new album Quitters with a laugh. In this follow up to his ANTI records debut, Beginners, Hutson moves away from the focus on growing up to the dread and complications of growing older. The laugh that announces Quitters is the kind you’ll find at the end of John Huston films, one of resignation and release, and somehow a cosmic laugh that says “California,” a place where lonely people gather together like birds.

Across Quitters’ 13 tracks, Hutson crafts this portrait of the place he’s from. In these short story-like songs, Hutson presents characters who carry this golden light and sinister geography inside them. It’s a place where everything in the end gets blown away and paved over with something new, where even the ocean and fires are always whispering, “One day we’ll take it all back.” This is a Los Angeles in constant transition, where childhood is lost, where home is gone and can never be visited again. Yet Hutson’s world is also one of happy accidents, where doors are left open on purpose, hoping that someone new will walk through. In the end, what’s left are these songs created by some future spirit, written to comfort the person we are now.

Produced by Phoebe Bridgers and Conor Oberst, Quitters is also a departure from the digital recording of his debut. Hutson stated, “When we made Beginners the aim was to make simple digital recordings of how I would play the songs in the room. With this record, Phoebe and Conor had an idea that it would be fun to make it to tape. Phoebe is my best friend and making Beginners with her was so comfortable and easy. So I wanted to work with her again.” “I took a long time with Beginners,” Hutson added. “I had those songs for 10 years, but these songs came out a lot faster.” Because the songs from Quitters were written in a shorter time, “there was a little bit of insecurity with the lyrics. Having Conor there served the purpose of someone who I really respect as a lyricist and could soothe my anxiety.”

You have to be in the mood for Christian Lee Hutson’s hushed, thoughtful and tender music, but when you are, it hits the spot. The singer-songwriter’s second album is a study of his home state of California—not the surf and sunshine and toothpaste-commercial girls, but the quieter living-room and backyard moments, of being fucked up by your parents and smacked by the reality of getting older, but finding a way to get through and make it work. “I need headphones to fall asleep/ I close my eyes and I pretend to be/ In my little room … Stepdad reading Treasure Island to me,” he sings on “Strawberry Lemonade,” its James Taylor guitar turning slippery and impossible to hold as a ghostly chorus hollers in the background. “I’m peeking through the bandages to see if I can handle it” goes “Endangered Birds,” the weeping strings tailor made for a Paul Thomas Anderson movie. Quitters is produced by Conor Oberst and Phoebe Bridgers and you can hear both their influences on Hutson, in that deceptively delicate songwriting style, melancholy interspersed with moments of simple beauty. “Rubberneckers,” in particular, is reminiscent of Bridgers’ more musically upbeat work, its snare and guitar sounding like they’re underwater as Hutson delivers a blow of self-deprecation by comparing himself to “a doctor’s office magazine.” There are also shades of Paul Simon’s self-titled solo debut on songs like “Age Difference,” an idiosyncratic little love song (“I am your biggest cheerleader/ Your smallest violinist”) sighing with mournful, lonesome horns. On a few songs, including “Sitting Up With a Sick Friend,” you can hear and feel the intimacy of fingers sliding up and down guitar strings; it’s almost chill-inducing. “Teddy’s Song” is carried by a slow, heavy thump of the drum that’s nearly funereal, but also includes the cozy-sad line “I sleep with the radio next to the bed on the floor/ because it sounds like my parents talking through the door. “OCDemon” is surprisingly perky. Punctuated by radio chatter and kissed with warm bass, “State Bird” suggests, “When life gives you a lemon, cut a hole in it, smoke some resin” (then repeats the line “I don’t think that this is working” until it’s practically a numbing agent). And “Blank Check” feels like a sign of hope, gorgeous, high-flying guitar cresting as Hutson reassures, “You don’t have to do anything you don’t want to do.” It’s a quiet manifesto, but still. – Shelly Ridenour