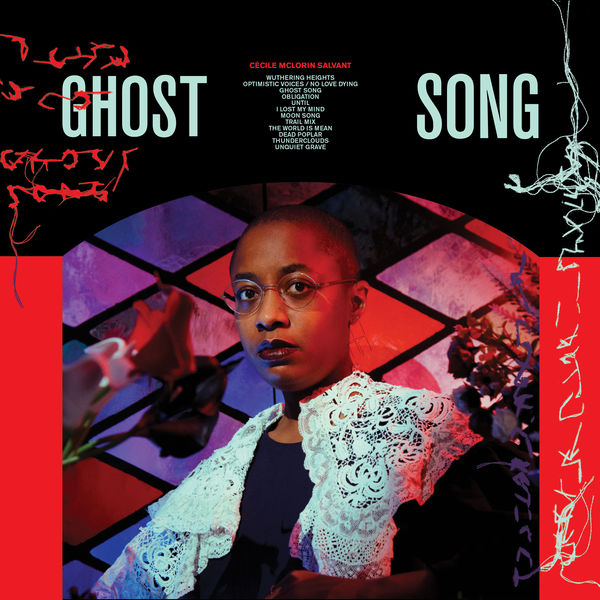 Just to show that there will be a Ghost Song before and after, Cécile McLorin Salvant opens her album with a rather unexpected cover of Kate Bush’s Wuthering Heights that she starts totally a cappella. Of course, the Franco-American has never followed the tradition of jazz singers to the letter – or what is expected of them – but here she drives the nail a little deeper both in her diction, still as original and fascinating, as in the – eclectic – instrumentation she has chosen. And then she herself admits that she was really interested, for the very first time, in the production of her recording. To a sound quest and not just to offer a simple photo of her and her band, as in the past. Here, the 2010 winner of the Thelonious Monk International Competition dares everything. The nonchalant ballad, carried by the virtuoso piano of his brilliant accomplice Sullivan Fortner (Moon Song), like the vibrant sean-nós, this highly ornamented style of traditional Irish singing (Unquiet Grave), or the cover at the same time jumping and grandiloquent of Kurt Weill and Bertolt Brecht (The World is Mean). Ghost Song offers a kind of extraterrestrial gospel before landing on a more muted pitch or a theatrical declamation and so on … One can easily be confused by this leapfrog-like eclecticism with sounds and decades, continents and moods. “I made an album like I make a playlist, able to string a twelfth-century music to a Kendrick Lamar track…”. It is in this never gratuitous, never vain originality that Cécile McLorin Salvant cuts the bridges with a certain tradition of vocal jazz. Tradition that it never rejects, on the contrary, but that it destabilizes as if by Obligation. As if to better appropriate it and prevent it from drowning in the formalin of museification. One thing is for sure: jazz is alive on Ghost Song!

Six albums into a career that continues to push limits and creative boundaries, Brooklyn-based vocalist and pianist Cécile McLorin Salvant, shows yet again that no genre pigeonhole or can define her vision. She’s a wide-ranging creative on a quest to find new contexts for her vocal stylistics which shade towards the nimble coloratura soprano end of the spectrum. Self-produced by Salvant, Ghost Song was recorded at Brooklyn’s Bunker Studio and St. Malachy’s Church in Manhattan by Todd Whitelock and Patrick Dillet in 2020 and early 2021, just before the pandemic made in-person recording sessions difficult. Salvant opens with a sweeping rendition of Kate Bush’s “Wuthering Heights” complete with ominous howling wind effects. Her rising, unaccompanied vocals simultaneously borrow from sinuous Arabic music and ringing Gregorian chant. That’s followed by a clever and unexpected mashup of a neglected bit of the Wizard of Oz soundtrack, “Optimistic Voices” (“You’re out of the woods/ You’re out of the dark/ You’re out of the night/ Step into the sun/ Step into the light”), where she’s accompanied by a rhythmically strummed banjo, which morphs into a cover of Gregory Porter’s languid love song, “No Love Dying,” with her longtime collaborator Sullivan Fortner taking over on piano and Alexa Tarantino lending a long flute solo. The music of Kurt Weill is catnip to adventurous vocalists (Lotte Lenya, Ute Lemper) and here Salvant, again accompanied by piano, flute, percussion and banjo skips and flutters through “The World is Mean.” The Salvant-composed title track, with the addition of Fortner on Fender Rhodes and Marvin Sewell on guitar, opens with a solo cry before becoming a bluesy rumination on love gone wrong—a favorite subject of Salvant’s. She ultimately blames herself: “My pride is my only company/ My pride will get the best of me;” it’s one of her finest love songs. The tune closes with choruses of “I’ll dance with the ghost of our love/ I will dance with the ghost of our long-lost love,” sung by the Brooklyn Youth Chorus. The mode shifts again as she gets snappy and chatty in another original, “Obligation” where she ponders the interplay in relationships of guilt, resentment, and desire. Sting’s “Until” gets a jazzy, vaguely Brazilian/Great American songbook-styled cover led by Fortner’s piano and Tarantino’s flute. Unlike many of the tunes where the accompaniment is spare and stark, a quintet accompanies this frothy frolic. A pipe organ provides the background to Salvant’s “I Lost My Mind” in which her voice is overdubbed in a rhythmic, disembodied loop while she cries above. The mood turns slow and lush in her torchy ballad, “Moon Song,” where her desire stirs: “Let me pine, let me yearn, let me crawl.” Her solo piano piece “Trail Mix” is an effective palette cleanser before music is put to lines from an Alfred Stieglitz letter to Georgia O’Keefe in “Dead Poplar.” Salvant appropriately closes Ghost Song with her convincing a capella version of the haunting English folk lament “Unquiet Grave,” (covered by Ween and Joan Baez, among others). Her commanding presence, her songwriting, her eclectic mining of songs from the past, the sparse but inventive arrangements and, of course, that sprightly voice all make Cécile McLorin Salvant a singular artist on Ghost Song. – Robert Baird