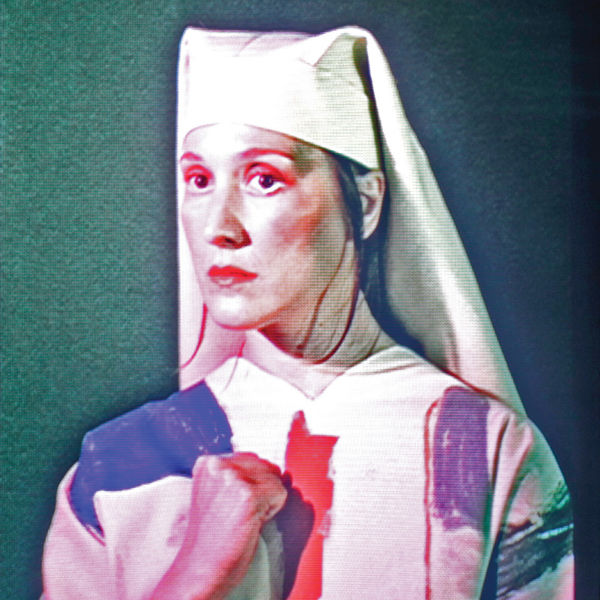 Sometimes this is by design. On the cover of her new album Pompeii, Le Bon appears in a structured headdress similar to a wimple, last en vogue circa the 14th century. Throughout the promotional campaign for 2019’s Reward, she repeatedly discussed the intricacies of the Bauhaus-style chair she designed and built to accompany the record. Her songwriting and guitar work has been defined by its uncanny dislocation from traditional categories for years; she’s psych, she’s arty, she’s post-punk, she’s minimalist, then she’s all and none of the above, depending on the day and the record.

Mentions of Le Bon typically come prepackaged in a short, near-unchanging list of adjectives: “absurd,” “surreal,” “experimental.” Pompeii is all of these things in places, and only not quite in others. Her trademark weirdo streak feels, at least by her metrics, almost subdued here, splitting focus with a doggedly singular melodic cohesion—she told Pitchfork she wanted “to make everything sound as though it had been made in the same day.” She succeeded.

Again, that is to say her weirdo streak is subdued, never absent. Le Bon’s poetics of the absurd figure each time Pompeii’s imagery seesaws between the ephemeral and concrete. Amidst the womp-womp synth sludge and tinny rhythmic tap of “Remembering Me”: “I wore the heat like/ A hundred birthday cakes/ Under one sun.” Pompeii exists in “cities built on monumental rage” in a “season of ash” under a “peacock moon.” She’s always opaque, never dull.

On the surface, Cate Le Bon’s seemingly chill, immersive music seems like something you could put on in the background while doing chores or just relaxing. Ha. In reality, it doesn’t leave you alone. It prods and pokes and forces you to engage—to marvel at her odd flourishes, deceptively complicated guitar parts and sly arrangements. She has said that Pompeii, her sixth album, was “written and recorded in a quagmire of unease.” With pandemic restrictions and fog leaving her to her own devices, the singer-songwriter had plenty of time to “grapple with existence, resignation and faith.” Her conclusion is pragmatic if not comforting: “The world is on fire but the bins must go out on a Tuesday night … I put a groove behind [the unease] to hold on to. The grief is in the saxophones.” In fact, Euan Hinshelwood’s sax is her co-star, a supporting actor but a major presence. It can suggest agitation “Dirt on the Bed,” and come on like honey on “Moderation,” which sounds full and warm with its groovy, playful bass. But don’t get too comfortable. This is art rock and it’s provocative. The lyrics reference a 1958 essay, “The Moon”—about being less impressed by technology than art—by Brazilian modernist architect Lina Bo Bardi, who magically found ways to make hard lines and “cold” materials exceedingly human-friendly. “I can’t have it/ I don’t want it/ I want to touch it,” Le Bon sings, skating beautifully along the contradiction of all-consuming appetite and decorum. It’s a push-pull that seems embedded in her: Le Bon hails from Wales but lives in Joshua Tree, two distinctly weird, remote and mythic locales where outsiderism is worn like a badge of honor. “Pompeii” unfurls with distorted carnival music, like a carousel out of tune, foreboding in the background even as the vocal melody is reassuring: Le Bon’s voice effortlessly slides up and down scales, a quick shape-shifter in the vein of Bowie. In fact, “French Boys” feels like it could have been a cut from his moody, slinky Let’s Dance era. “Harbour,” meanwhile, has a different ’80s vibe, its synth pop and grounded ethereality recalling Kate Bush or Tracey Thorn. – Shelly Ridenour