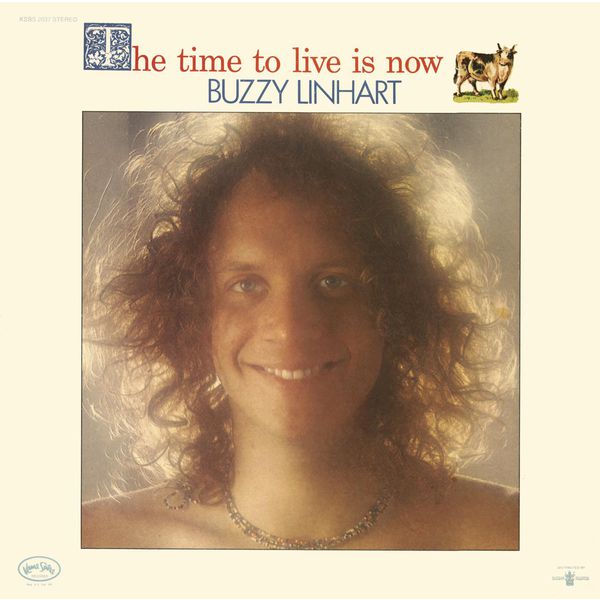 Buzzy Linhart’s first of two albums for Kama Sutra, three if you include the band Music’s on the Buddah-distributed Eleuthera Records, 1971’s The Time to Live Is Now has the songwriter playing with different styles and sounds in a setting that is not as refined as the Eddie Kramer co-produced Music album or Barry Beckett and Roger Hawkins’ production of 1974’s Pussycats Can Go Far. But don’t blame the artist for that. In an exclusive interview for the All Media Guide conducted February 28th, 2002, Linhart revealed some of the secrets of The Time To Live Is Now: Bill Takas and Luther Rix, the bass player and drummer, are “world class jazz and classical musicians.” Bill Takas spent nine years on the Tonight Show, and they co-founded Ten Wheel Drive (with Genya Ravan; see the Construction #1 LP). “We had been performing eight-to-ten months as a trio, sometimes with sax…it was supposed to be more [produced] like ‘Pussycats’ (Pussycats Can Go Far)…but [record exec] Neil Bogart played this for a group of 30-something pros for Buddah/Kama Sutra, and they got up out of their chairs and danced to it.” That resulted in the late Neil Bogart deciding he wanted to release the roughs – the rough vocals, the rough mix, even with a 32,000 dollar budget, which was pretty good at that point in time. They called this “rock-folk,” rock with a jazz tinge as opposed to “jazz rock” that was Blood, Sweat & Tears. Even in its raw form, it is great stuff. Linhart lifts lines from here and there. Four lines from the Beatles’ 1968 hit “Lady Madonna” are taken almost verbatim in the title track – “Who buys the money, when you pay the rent” – while the strange “Cheat Cheat Lied” is fused with Percy Mayfield’s “Hit the Road Jack,” Linhart lifting a melody and line from Blind Faith’s “Presence of the Lord.” On the following album, Buzzy (also called “The Black Album” as his 1969 outing on Phillips was also titled Buzzy), he’s more blatantly lifting “What the World Needs Now Is Love” for his “Rollin’ On” title. When he goes into Chester Powers’ 1963 composition “Let’s Get Together,” you think he’s absconding with lyrics and melody again, but it’s actually a very cool cover of the Youngbloods’ “Get Together,” which hit for them in 1967 and 1969. It is charming, as is the first appearance of “Friends,” the Barry Manilow-produced hit for Bette Midler in 1973, re-cut by Buzzy on Pussycats Can Go Far and the only appearance here of friend Moogy Klingman, in the capacity of co-writer. Most of the material is by Linhart, “Good Face” being co-written with future Music bandmemberDoug Rodrigues, while drummer and co-producer Luther Rix pens and sings “Comin’ Home.” The group covers Jordan Kaplan’s “There’s No Need” with the legendary Ken Ascher on piano, and Jeannie Linhart does a vocal harmony on “The Love’s Still Growing,” but other than that, it’s the three-piece unit producing and performing on this Kama Sutra debut album. Todd Rundgren would come onboard to mix “The Black Album,” 1972’s Buzzy, which would replace Takas with Danny Trifan on bass, and add Jeff “Skunk” Baxter on guitar, but The Time to Live Is Now remains an important, albeit raw, document of a major talent emerging from the early ’70s.