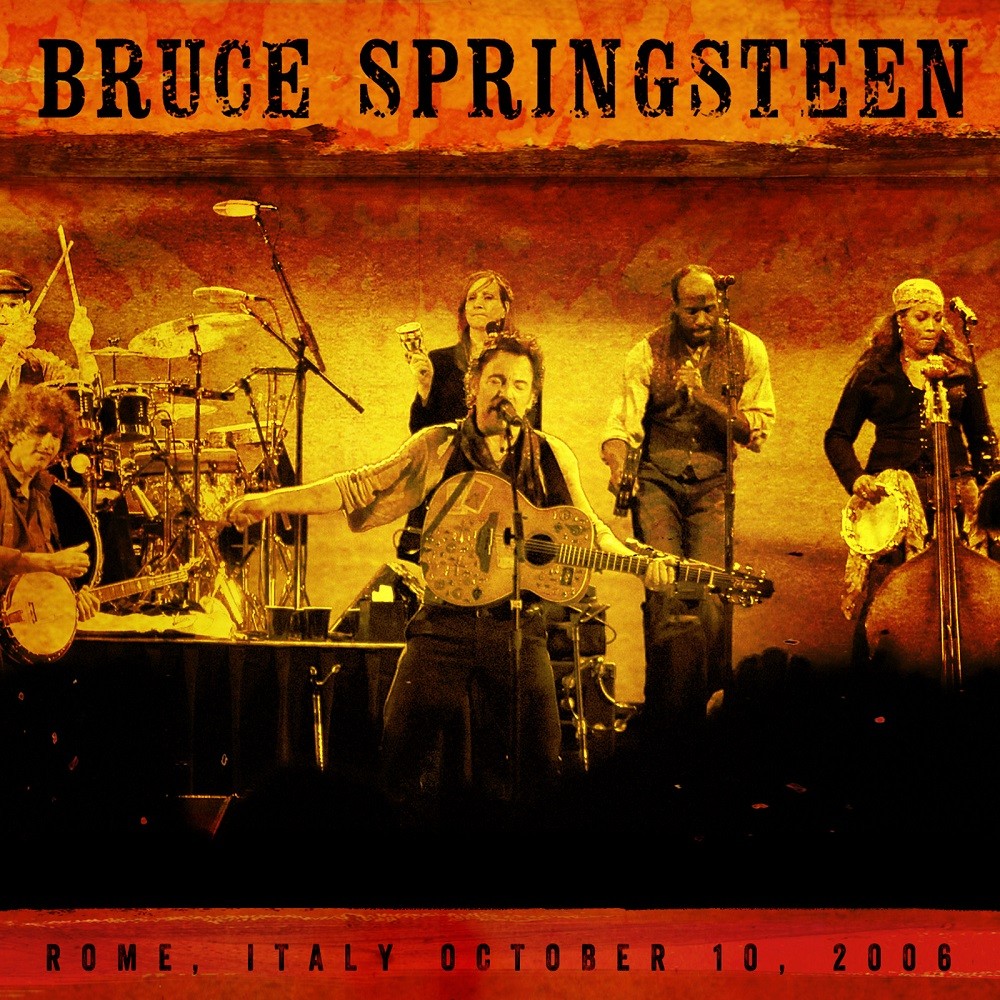 There are few periods in the post-Reunion era as busy as 2005-2009, a five-year stretch that saw the release of four studio albums each with accompanying tours, surely none more fun for Bruce Springsteen himself than 2006’s sojourn in support of The Seeger Sessions.It’s easy to think of Springsteen’s work with the Sessions Band as an isolated outlier, but listening to Rome 10/10/06, the third release from the tour in the Live Archive series, there’s a case for it as the meaningful bridge between Devils & Dust (released in 2005) and Magic (2007), as well as a precursor to the extended band line-up we saw on Wrecking Ball in 2012.

Of the Seeger Sessions Tour’s three legs, two of them were in Europe — that reflected how this rootsy style of music was embraced more wholeheartedly there than it was in the States, which seemed to respond with a collective, “If it isn’t solo and it isn’t with the E Street Band, then what is it?”

What “it” is, of course, is a survey of American roots music, centered around the folk movement with forays into blues, jazz, and country, as well as an alternate reading of some of Springsteen’s own music through that same lens.

The Rome audience could not be more welcoming to the set-opening “John Henry,” which gets the show off to a rollicking start. It’s clear the crowd is well familiar with the Seeger Sessions album and, better still, recognizes that the type of music, presented by a band of this scale, demands their participation, which only feeds Springsteen all the more. Happy fans, happy band.

Rome eats up stellar renditions of the core Seeger Sessions material, singing along in full voice to “Old Dan Tucker,” chanting their approval of the horn section, clapping in unison after “Erie Canal,” and embracing the call-and-response of “Pay Me My Money Down.” If you ever needed confirmation of the role an audience plays in the concert dynamic, Rome 10/10/06 is the proof.

The fans’ recognition of Springsteen originals is equally impressive, getting “All the Way Home” straight off the opening chords, then singing the chorus well after the band stops playing. The arrangement of “All the Way Home” is relatively faithful to the Devils & Dust studio version though enhanced by the big band, especially Marty Rifkin’s lyrical pedal-steel solo. The song was only played three times on the 2006 tour and hasn’t been played since, making it a vital inclusion here.

Elsewhere one has to marvel at the rearrangements of classic cuts of the canon. “Atlantic City” started life as a high, lonesome folk song on Nebraska, became an electrified pile-driver with the E Street Band, and transforms yet again into a widescreen murder ballad with the Sessions Band. This reading of “Atlantic City” has the fastest tempo of the three arrangements, a storming pace that belies the song’s somber subject matter, which is reflected tonally in the guitar, organ and vocal parts. The contrast is compelling.

Springsteen changes his vocal inflections and cadence in a striking interpretation of “The River,” which adopts gospel and even waltzing Tejano notes. The story remains the same, but the metaphor of the river itself gains stature and turns the song into more of a parable than ever before.

The most E Street moment of the night is “Long Time Comin’,” another D&D track that hews to the original album structure only to be supercharged by the horn section and wonderful organ work from Charlie Giordano. “Long Time Comin’” is SUCH a tremendous band song, it’s bewildering it only made four setlists with the E Street Band post-Sessions, especially gIven the horns-and-singers lineup that debuted in 2006 was essentially recreated for the Wrecking Ball tour.

The last two originals of the night show the incredible range of the 2006 band. “Open All Night” is recast as a swing-jazz jumper in the style of “Pennsylvania 6-5000.” “Ramrod,” led by Girodano’s accordion, finds these immensely talented musicians channeling Los Lobos with verdadero estilo.

To the core Seeger Sessions tracks and E Street redux, Bruce adds a few choice covers, the most notable being one of only ten performances of “Long Black Veil,” written by Danny Dill and Marijohn Wikin, and covered by countless country artists including Johnny Cash.

Bruce and the band turn this stark infidelity ballad (a touchstone, lyrically, for Springsteen’s own “Nebraska”) into a sweeping epic that borrows some of its arrangement gravitas from, of all things, Dobie Gray’s “Drift Away,” a song famously covered by Springsteen and the E Street Band in 1984 with Little Steven. On this night, Marc Anthony Thompson trades verses and lines with Springsteen in a striking performance that is a welcome addition to the Live Archive catalog.

A belissimo Roma evening comes to an close with “American Land,” born of the Sessions Band and later fully embraced by the E Street Band on tours ever after. In front of what had to be among the most appreciative audiences of the entire tour, Bruce Springsteen and his Sessions Band show their virtuosity and interpretive prowess, and in the process draft a blueprint for what Springsteen would do on stage just a few years later.