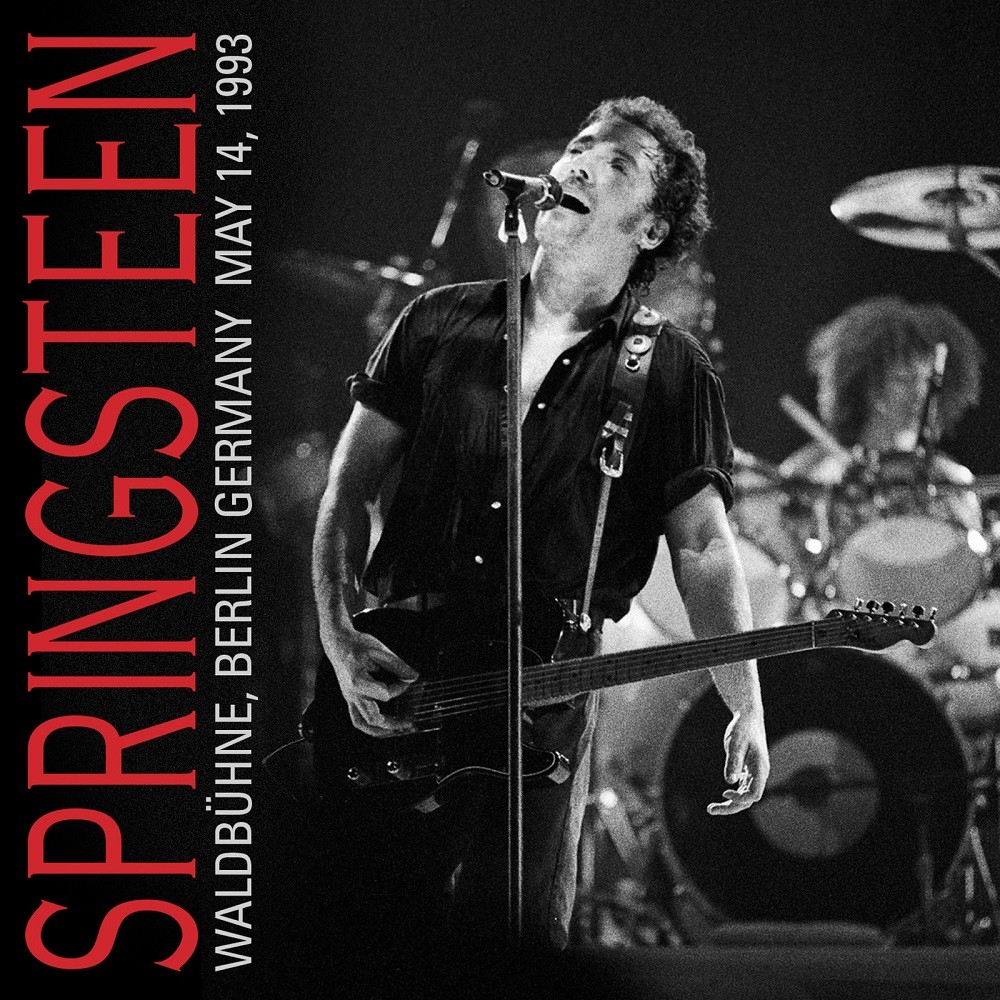 Bruce had not one but two albums’ worth of material to integrate from Human Touch and Lucky Town; a challenging balance to strike between familiar and new material; and a bigger, rootsy-er band attempting to hold its own in the shadow of E Street, but from which he could summon the magical vocal power of a gospel choir. As my friend Aaron would say, a tricky biscuit.

The previous Archive release from this tour, Boston 12/13/92, featured 16 songs from the new companion albums. Five months later in Berlin, the main set shifted significantly, as nine songs from Human Touch and Lucky Town are joined by 14 “classics” (six culled from Born in the U.S.A.), five covers, plus a four-song acoustic appetizer to open the show, a unique design feature of the European gigs.

What the result lacks in narrative cohesion it makes up for in distinct, compelling moments as Bruce—alone, and with his new (save for Roy Bittan) companions—walks an alternate musical path through it all. Berlin 5/14/93 serves as an exemplar of the unique period that was Europe ’93.

As the lone keyboard player on the 1992-93 tour, Bittan does a lot of heavy lifting. A greater-than-usual reliance on synthesizers, primarily via Roy’s Yamaha DX7 (the first widely adopted digital synth), is akin to Max Weinberg’s drum triggers on the back half of the Born in the U.S.A. tour.

Both belong to a specific place and time in the sonic landscape, because they are so prominent in the live mix of their respective eras, they can feel obtrusive by today’s standards. If you find yourself bumping on Roy’s DX7, recalibrate your modern ears—this is the sound of 1992-93.

Berlin opens with something we can all agree on: a wonderful, four-song acoustic set that commences with the Christic Institute arrangements of “Darkness on the Edge of Town” and “Adam Raised a Cain.” How thrilling it must have been to see these solo performances in their striking new renditions, and Bruce was just getting started.

The world premiere of “Satan’s Jeweled Crown” follows, with Bruce joined by the backup singers who emphasize the church-pew side of the “country-gospel song” first popularized by the Louvin Brothers. The stately hymn only appeared in the set six times, five in Europe in 1993, making this a rare and welcome addition to the Live Archive series.

If those three tunes to start weren’t enough, how about the shorts-soiling inclusion of unreleased-at-the-time BIUSA outtake “This Hard Land”? When met with a knowing cheer, Bruce responds, “Yeah, you bought the bootlegs. You shouldn’t have done it.” The song was still two years away from its official release on Greatest Hits In 1995, so for hardcore fans, “This Hard Land” in the show was a holy grail.

As noted above, Springsteen taps his classic catalog further in Berlin than he did in 1992, with some tracks translating off E Street more successfully than others. The choir vocals of the backup singers bring a soulful sweetness to songs like “Hungry Heart” and “Working on the Highway.” The 1992-93 band always nails “Badlands” and does here, too.

A spare take of “The River,” which the audience greets with an enormous cheer, is the vocal highlight. Bruce sings it fresh, poignant, and true above Bittan’s gorgeous piano. The peak comes with the trio of “Downbound Train,” “Because the Night,” and “Brilliant Disguise.” The last of these offers unexpectedly intriguing guitar from Shane Fontayne, while Bruce himself tears off a steamy solo in “Because the Night,” which also gains gravitas from the vocalists.

But there’s no mistaking the rise in Bruce’s enthusiasm when he moves from songs like “Atlantic City” and “My Hometown” to Human Touch/Lucky Town material like “Man’s Job” and “Leap of Faith.” Vocal inflection and energy signal his commitment, and, to a song, the recent additions have strong outings in Berlin, with fine performances of “Better Days,” “Lucky Town,” “Human Touch,” and the elegiac, underrated encore high point, “My Beautiful Reward.”

The one place where old and new combine to stirring effect is the denouement coupling of “Souls of the Departed” and “Born in the U.S.A.,” framed by several Jimi Hendrix-inspired bars of “The Star-Spangled Banner.” With Roy Bittan triggering news soundbites of troubles, domestic and foreign, these parallel stories of the human toll taken by such conflicts form one seamless, biting statement that lands harder than anything else in the show.

Bruce’s choice of covers also confers deep resonance on the Berlin performance. The aforementioned “Satan’s Jeweled Crown” is a God-fearing, serious tune and sits right at the intersection of the church and the Opry. “Who’ll Stop the Rain” and “Rockin’ All Over the World” are familiar fare, yet always welcome, especially with big gospel voices adding layers of soul. Those voices come up even bigger on Jimmy Cliff’s “Many Rivers to Cross,” presented in straightforward and powerful fashion. It was one of the consistent highlights of these 1993 concerts.

Speaking of resurrections, after four sterling performances on 1988’s Tunnel of Love Express Tour, Springsteen brought “Across the Borderline” back into four 1993 setlists, the last of which was Berlin. The song is most closely associated with Ry Cooder, who wrote it with John Hiatt and Jim Dickson. Like Tom Waits’ “Jersey Girl,” “Across the Borderline” is a leading candidate for the most Springsteen-esque song Bruce has covered but didn’t write. The Berlin version is blessed with the heartfelt vocals of Gia Ciambotti, Carol Dennis, Cleopatra Kennedy, Bobby King, and Angel Rogers, who bring majesty to a predominantly synthesizer- and guitar-led arrangement.

Such 1993 highpoints surely inspired Springsteen to combine the best of both worlds in 2012 as the Wrecking Ball tour brought E Street Band and E Street Choir together. In fact, “Many Rivers to Cross” featured in the last warm-up gig in Austin before the start of the proper Wrecking Ball tour.

Work-in-progress or not, the 1993 European tour, as captured on a May night in Berlin, remains a fascinating exploration of Bruce’s wide, musical aperture, especially when seen as the antecedent for some of what was to come.