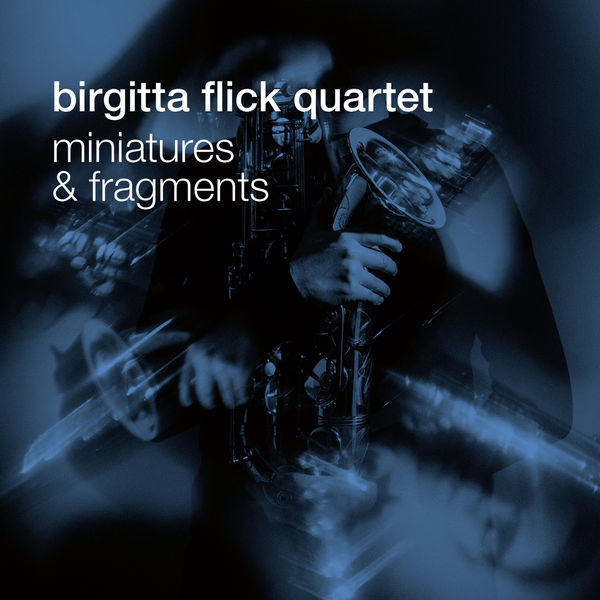 The quartet of the Berlin saxophonist and composer Birgitta Flick is a band with a unique magic that has been playing together for 10 years. This familiarity, which is particularly important for a group that relies so heavily on improvisation, is also heard on the new, fourth album “Miniatures and Fragments” from the Birgitta Flick Quartet.With the pianist Andreas Schmidt, the bassist James Banner and the drummer Max Andrzejewski, Flick has fellow musicians on board who are extremely subtle and sensitive. Banner comes from England, but lives in Berlin and is known for his own projects such as Usine, the duo with Stephanie Lamprea or the duo Practically Minded with Declan Forde. Max Andrzejewski has been one of the active members of the Berlin scene for years and also plays in Duo Training with the saxophonist Johannes Schleiermacher and the chamber music ensemble Stemeseder/Andrzejewski light/tied in addition to his large ensemble Hütte as well as having received numerous orders for compositions. “Max and James are closely attuned to each other’s playing,” band leader Birgitta Flick stated in appreciation of the two, “and that benefits the band.” Andreas Schmidt has been active in the German jazz scene for so long that he has already played or composed for a number of musicians: from Lisa Bassenge and Aki Takase to Lee Konitz and Rudi Mahall to Katja Riemann and Dave Liebman. Together with Birgitta Flick, this results in fundamental, solid unity. “It’s as if I can just plunge into a space when we play together,” the saxophonist stated happily. “The clairvoyance and sensitivity of Andreas, James and Max are the basis of our way of playing.”

With “Miniatures and Fragments”, the new album is titled unpretentiously as usual and contains eleven new pieces that invite you to listen carefully with their chamber music approach. Inspired by Alban Berg, the “Cycle”, which is introduced with a gentle saxophone line, thrives on subtle changes in tempo and a cool aesthetic, while the elegiac “Land of Gold” glides gently and “Hope” turns out to be a touching ballad that does not shy away from experimental detours. In addition to the traditionally named songs, the quartet also plays three “Color Studies”, as they are known from the last album “Color Studies” and come from a series of compositions with which Birgitta Flick has been experimenting for years. “These pieces are even more sketch-like than my other pieces for this band,” the tenor saxophonist explained, who otherwise also composes a lot of music for choir and contemporary chamber music ensembles such as LUX:NM, “and are therefore particularly suitable for our improvisational approach.” The “Color Studies #4” perhaps illustrate particularly well how this approach can lead to different music, because two different versions of the piece start and end the album.

In addition to eight pieces of their own, the Birgitta Flick Quartet has once again played their own versions of songs composed by others. On the one hand there is the Swedish chorale “Till dig ur hjärtegrunden” with its beautiful melody, which the band savors in its own way. Birgitta Flick studied in Stockholm and has numerous artistic connections to Scandinavia, from which “Dalama”, the second album of the quartet was produced with guest musicians Lina Nyberg, Silke Eberhard and Nico Lohmann. And then there are two of the best-known standards in jazz history, which the Birgitta Flick Quartet gives new, haunting perspectives: Irving Berlin’s “How Deep is the Ocean”, introduced to the jazz canon by Charlie Parker and excellently interpreted by protagonists such as Chet Baker, Bill Evans, Stan Getz and Billie Holiday, and Jerome Kern’s “All the Things You Are”, which fascinated Lee Konitz so much that he played it all his life, for example. “The two standards have been with me for a very, very long time,” Birgitta Flick said. “I could play them every day and wouldn’t get tired of them. I love the melodies and the harmonic progressions. I just wanted to try this reharmonization in ‘How Deep is the Ocean’, and I composed the line for ‘All the Things You Are’ in the Stockholm subway as a composition study.”

We experience the amazing pull of a quartet, this small, incredibly dynamic instrumentation form. In any case, the musicians must love freedom as much as they love their instrument. They start with a minimum of specifications, inevitably interlock, merge into each other.

For Flick, Andrzejewski, Schmidt and Banner experiment with the compositions and their melodic and rhythmic structure in order to create music together from and for the moment.