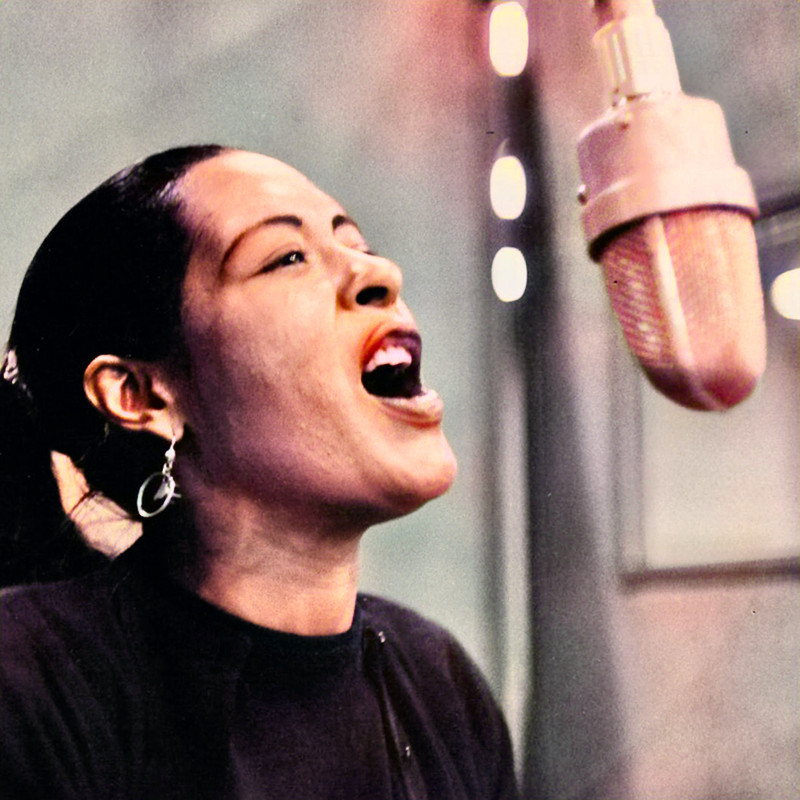 Eleanora Fagan (April 7, 1915 – July 17, 1959), known professionally as Billie Holiday, was an American jazz and swing music singer. Nicknamed “Lady Day” by her friend and music partner Lester Young, Holiday had an innovative influence on jazz music and pop singing. Her vocal style, strongly inspired by jazz instrumentalists, pioneered a new way of manipulating phrasing and tempo. She was known for her vocal delivery and improvisational skills.

After a turbulent childhood, Holiday began singing in nightclubs in Harlem, where she was heard by producer John Hammond, who liked her voice. She signed a recording contract with Brunswick in 1935. Collaborations with Teddy Wilson produced the hit “What a Little Moonlight Can Do”, which became a jazz standard. Throughout the 1930s and 1940s, Holiday had mainstream success on labels such as Columbia and Decca. By the late 1940s, however, she was beset with legal troubles and drug abuse. After a short prison sentence, she performed at a sold-out concert at Carnegie Hall. She was a successful concert performer throughout the 1950s with two further sold-out shows at Carnegie Hall. Because of personal struggles and an altered voice, her final recordings were met with mixed reaction but were mild commercial successes. Her final album, Lady in Satin, was released in 1958. Holiday died of cirrhosis on July 17, 1959, at age 44.

Holiday won four Grammy Awards, all of them posthumously, for Best Historical Album. She was inducted into the Grammy Hall of Fame and the National Rhythm & Blues Hall of Fame. She was also inducted into the Rock & Roll Hall of Fame, though not in that genre; the website states that “Billie Holiday changed jazz forever”. Several films about her life have been released, most recently The United States vs. Billie Holiday (2021).