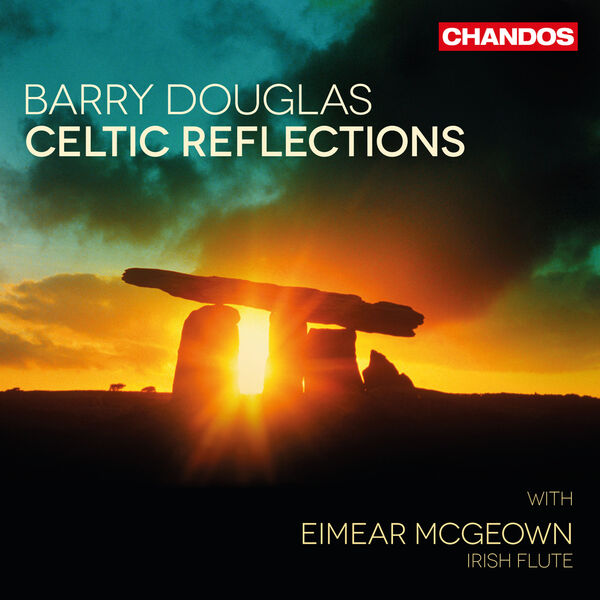 Barry Douglas is best-known for his celebrated performances of great works central to the classical repertoire, not least through his acclaimed Brahms and Schubert series on Chandos. In his new album Celtic Reflections we hear another side to his musical life. Playing his own arrangements, he explores the melodies of his native Ireland, from ancient folk tunes passed down through the ages to pieces by contemporary songwriters. He is joined by the talented young flautist Eimear McGeown who, as well as being an accomplished classical player, is a renowned and passionate exponent of the traditional Irish flute which she plays in this recording.Many of the arrangements are based on transcriptions of folksongs and folk tunes that offer a glimpse of Celtic cultures past. The melody for ‘My Lagan Love’ had been passed down aurally for generations before the musicologist Hector Hughes transcribed it in the early twentieth century, while the folksong collector Edward Bunting transcribed ‘Irish Lullaby’ at the last-ever gathering of old Irish harpers in 1792. Well-known folk tunes heard here, such as ‘Danny Boy’ and ‘Carrickfergus’, trace their roots far back in history and have come to represent Ireland in the popular imagination. Barry Douglas’s caring arrangements breathe new life into this music and transport us on a journey across the centuries.

Presenting a modern take on traditional Celtic music, Eimear McGeown performs a number of her own compositions. Inis and The Mushroom Tree are inspired by personal experiences and informed by a knowledge of and passion for the folk music of her homeland.

“Barry Douglas is to be applauded for these arrangements and his direct communication skills. This music means a lot to him and that shows in his performances… The playing, recording (clear and immediate) and musical content are all first class. It was probably a refreshing change for Mr Douglas to move out of the highbrow arena for a short while and record something different from his usual fare. This is a lovely disc.” (John Whitmore – MusicWeb-International)