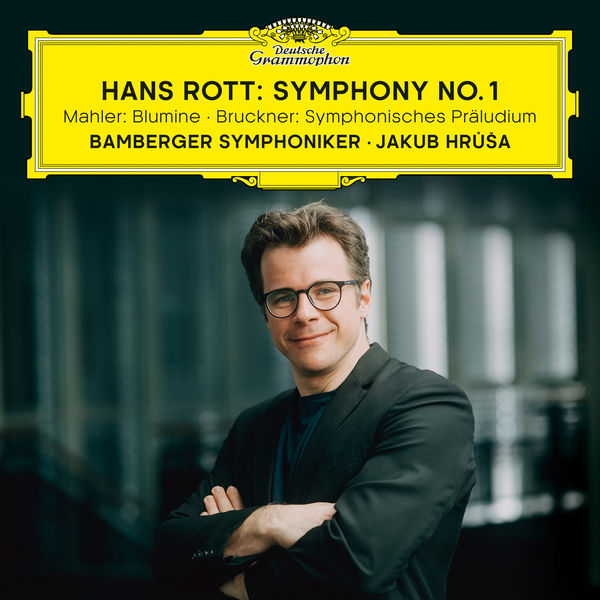 “Who is Hans Rott?” Gustav Mahler gives the meaningful answer: the “founder of the new symphony as I understand it.” Deutsche Grammophon now presents a new recording of Hans Rott’s Symphony No. 1. Full of energy and depth and with a breathtakingly velvety sound, the Bamberg Symphony Orchestra plays under its chief conductor Jakub Hrůša. This is an impressive recording of a composer whose rediscovery in recent years has continued to thrill audiences and enrich our knowledge of late Romantic music.

Hans Rott wrote his first symphony, his most important work – full of groundbreaking musical ideas and a unique vision of how the symphony might develop – from 1878-1880, at a time when his younger classmate Mahler was just getting started and his mentor Bruckner was struggling through his middle period. Jakub Hrůša places this masterpiece alongside works by Mahler and Bruckner, shedding new light on a work that deserves to be at the center of the symphonic repertoire.In a new collaboration with the Bamberg Symphony Orchestra (and no doubt in memory of the particularly important historical partnership of Jochum, Keilberth and Suitner in the 1950s), Deutsche Grammophon is now releasing a recording of Symphony in E major by Hans Rott. This Austrian composer, born in 1858, was a friend of Mahler’s and died at the young age of 25 in June 1884. This Symphony, which remains his greatest completed work, reveals a highly original temperament which is undoubtedly influenced by Bruckner. Rott’s greatest features are his great structural fluidity, his orchestra’s sharp edges and his beautiful melodic motifs, as evidenced in the moving Sehr langsam. This First Symphony (the Second remains unfinished) is full of avant-garde musical ideas that Mahler would continue to pursue after his friend’s death and is interpreted here by the Bamberg Symphony Orchestra under the direction of their conductor Jakub Hrůša. This version is particularly lively, especially as the magnificent sound recording is rather light and airy.

Jakub Hrůša completes Rott’s Symphonie with two equally rare works: Mahler’s ‘Blumine’ (which was the original second movement to his ‘Titan’ symphony but was later removed from the score by the composer after a few performances) and Bruckner’s Symphonic prelude in C minor. Hrůša’s Mahlerian adventures with the Bamberg Symphony are often sensory and powerful, and the magical instrumentation of this new album (especially in ‘Sehr langsam’ from Rott’s Symphonie) is no exception. It’s proof that there’s a real need for a label like Deutsche Grammophon to release the great (and complete) Mahler Symphonies, using the best possible orchestra, a conductor who’s divinely inspired in the repertoire and beautiful recordings, just like they’ve done here. – Pierre-Yves Lascar