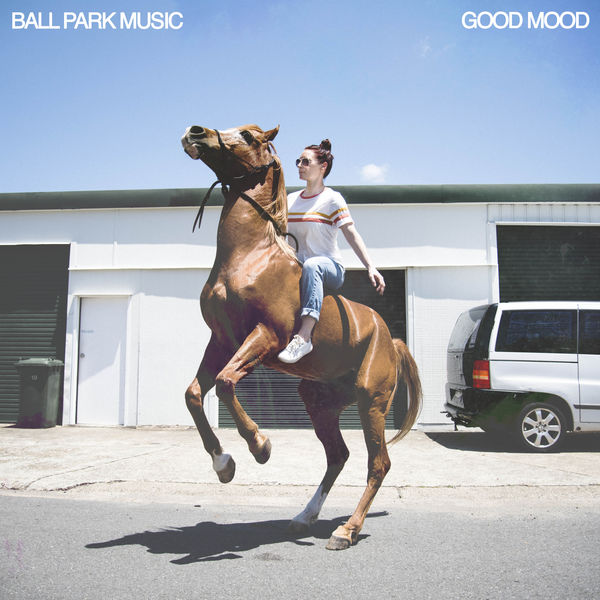 Brisbane 5-piece Ball Park Music have sunk a hell of a lot of time into the process of sound sculpting. Very few acts in Australia nowadays have the same kind of feel that Ball Park has achieved. Now their songwriting harks back to their early days of QUT-flavoured sardonic power pop, but with the newfound sonic maturity of a band that has a near-decade of recording under its belt . This is a good thing.

Frontman Sam Cromack has always had a way of channelling the mundane aspects of life and squeezing them into strange, lyrical mashes of almost-nonsense. Good mood opens, as usual, with a clipping groove set by Darren Hanson (drums) and Jen Boyce (bass) as washes of now-trademark warbling guitar spin around the listener. And bang, there’s that mundane-squeezed-into-almost-nonsense lyric straight away in The End Times, as ‘All hope is ripped right out of the ground and mixed with corn syrup”. Delicious.

Yes, the silly subject matter that reminds me of Ball Park’s seminal first album Happiness And Surrounding Suburbs is present in a way here, talking about sitting by the buzzer and waiting for some kind of meaning. It’s a little less youthfully optimistic and a bit more sarcastic. It’s there in I Am A Dog and it’s particularly there in Hands Off My Body, where guitar effects simulate the old-school hip-hop record scratches of the nineties while Cromack yells about amputating parts of his body that are undesirable. It’s silly but also gripping. Some kind of tinny keyboard sound (maybe a stylophone – look it up) played by Paul Furness (Keyboards) forms an insistent ostinato over the repeated claims of self-mutilation, truly reminding me of the bat*** insanity that was reached on their debut but with a thousand times more swagger from the near-constant touring and recording Ball Park have been doing in all that time.

Speaking of swagger, there’s a true confidence in the way Frank plays out, with nothing but two verses and a looped chorus to hold our attention as the band just slowly builds into a compressed, pulverising smash of british-drum-and-bass-tinged oblivion. Influences from vocal pioneers like Imogen Heep and Bon Iver seem present on this one as Cromack sings with some kind of harmonising effect that transforms his voice into a choir of robots, and swears he’ll “drink venom till he cannot breathe”.

Also present on this record is a consistency that Ball Park do not always (but certainly can) achieve – there are no true dud tracks, and the mood (heh) is kept even through less engaging moments like the penultimate If It Kills You and the ballsy, autotune-laden So Nice. Sandwiched inbetween them is the gorgeous Dreaming Of America, which stands out as one of the highlight ballads of Ball Park’s career. It’s worth it just for the drum sound. Check out them toms, people.

And of course it wouldn’t be Ball Park without some kind of epic closer. I Am So In Love With You echoes the sentiment of Great Display Of Patience from their sophomore record Museum. It’s more than a little reminiscent of a certain Neutral Milk Hotel song (if you know, you know) and it truly delivers on its title. Three one-stanza verses and a one-line chorus. No excess. So simple. McCartney himself would be proud.

Yes. Ball Park don’t always deliver a good record, but they do it often enough to warrant your continued attention and patronage. Australian music hasn’t sounded this good since… well, since we outsourced it to New Zealand. (Crowded house review coming soon.)