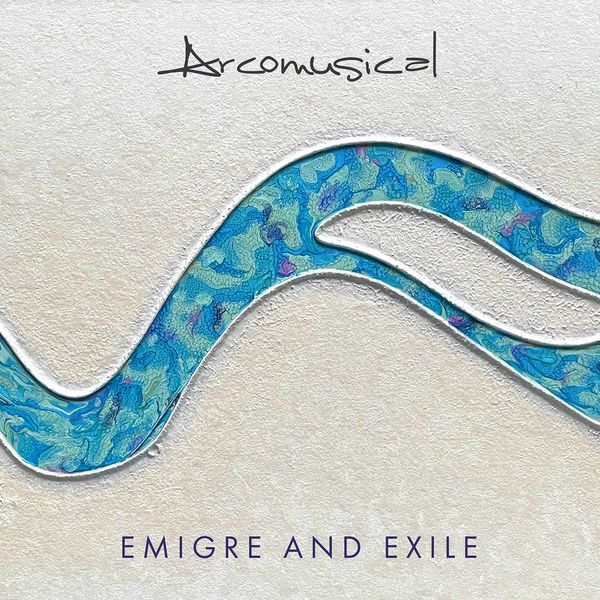 Arcomusical, led by percussionist/composer/scholar Gregory Beyer, is an ensemble devoted to the promotion of the berimbau, an Afro-Brazilian instrument closely associated with the body game of capoeira. Through Beyer’s stewardship, Arcomusical has carved a unique path commissioning new works for berimbau ensemble and expanding its presence within contemporary concert music. In addition, Arcomusical has established meaningful relationships in Brazil, notably cultivating Arcomusical Brasil, a sister ensemble based in Belo Horizonte. “Emigre and Exile” includes premiere recordings of music by Matt Ulery (the title track), Alexandre Lunsqui, Jeremy Muller, and Gregory Beyer.

Arcomusical, directed by percussionist Gregory Beyer, is an ensemble dedicated to championing the voice of the Afro-Brazilian musical bow, the berimbau. Part of a lineage of related African and diasporic musical bows, the berimbau occupies an essential place in the percussion pantheon, as a connecting link to instrumental traditions of Sub-Saharan Africa, a central component of the immersive martial arts practice of capoeira, and a cultural touchstone for resistance to oppression in the Americas. As Arcomusical has developed, it has expanded its commissioning, performing, and educational activities to include Arcomusical Brasil, a Brazilian sister chapter, cultivating an important connection with practitioners from the instrument’s native home. This release, the group’s third, highlights several new works written for Arcomusical that celebrate its unique versatility in chamber, contemporary, and folkloric contexts. Even when playing the most intricately notated scores, the group’s performances reflect a symbiotic performing style grounded in the instrument’s history.

Opening the collection is Jeremy Muller’s Singularity, a sextet that revels in shifting rhythmic and melodic patterns. The title alludes to multiple meanings – on one hand, it references the relationship between simple, accumulating changes and the implications for the larger systems of which they are a part. On the other hand, Muller evokes the philosophical concept of “The Singularity,” or the moment when artificial intelligence surpasses human intelligence. The hypnotic figures that are passed through the ensemble conjure the steady, irreversible march of time and its concomitant evolving changes.

Gregory Beyer’s works allow the listener to hear the berimbau in three progressive contexts, first as a member of a mixed percussion ensemble featuring mallet instruments, then in a duo setting, and finally as a solo instrument. Inspired by Berio’s iconic 1973 quartet Linea, Fios e linhas opens with a simple unison motive between vibraphone and berimbau. As the other instruments enter, Beyer plays with expectations and enriches the texture, introducing polyrhythms, syncopation, and passing tones. A middle section features more sustained melodic textures, before the work closes with an infectious groove inspired by the northeast Brazilian style of baião. for Adam and Jess is based on an improvisation Beyer recorded with a student in 2007 and highlights the breadth of invention possible with two berimbaus, facilitated by the instrument’s idiosyncratic set of limitations and capabilities. Sakura Park is an homage to a small park in the Morningside Heights neighborhood of New York City directly behind the Manhattan School of Music where Beyer studied as a graduate student. The piece is in two sections – the first, in duple meter, is regal and processional, while the second section is in a lilting triple meter. Sakura Park allows us to hear the berimbau in isolation which in turn illuminates how it functions in an ensemble setting.

Matt Ulery’s eclectic six-movement work Emigre & Exile integrates the various roles the berimbau occupies in Arcomusical’s practice into an amalgamated hybrid and is an outgrowth of his own omnivorous musical interests. Joining the ensemble on acoustic bass, Ulery uses intricate hocketing in the ensemble to create rhythmic and melodic mechanisms that truly make the ensemble sound like one hyper-berimbau. A luminous harmonic language pervades the piece, while shifting metrical syntax embeds subtle differences of shading into repeated figures. Ulery’s work transcends aesthetic partisanship, containing elements that will appeal to fans of many different genres.

The album closes with its most experimental music, Alexandre Lunsqui’s sextet Repercussio. Opening with a multi-timbre swell that grows from non-pitched scratching, Lunsqui outlines a chordal texture with insistent repeated notes in ascending intervals. The textural heterogeneity of the opening asserts itself throughout the piece as the music glides seamlessly between pitched and unpitched gestures. A dynamic middle section features a barrage of scrapes and percussive sounds throughout the ensemble that uncannily imitates electronic music with acoustic instruments. After a climactic ensemble passage of alternating triplet figures, Repercussio closes with the most elemental sound a berimbau ensemble makes, several sticks hitting wood, gradually decelerating as if they had been dropped down a flight of stairs.

Arcomusical courageously eschews entrenched boundaries in music. By championing and expanding the repertoire for an instrument most commonly associated with folkloric music, and doing so with a broad aesthetic sensibility, Beyer and Arcomusical assert that all traditions are open to the berimbau and make the berimbau accessible to all audiences. Through its open, humanistic approach, Arcomusical dispenses with false binaries, proving that there is no dissonance between remaining connected to an instrument’s roots while exploring its potential within diverse musical contexts.