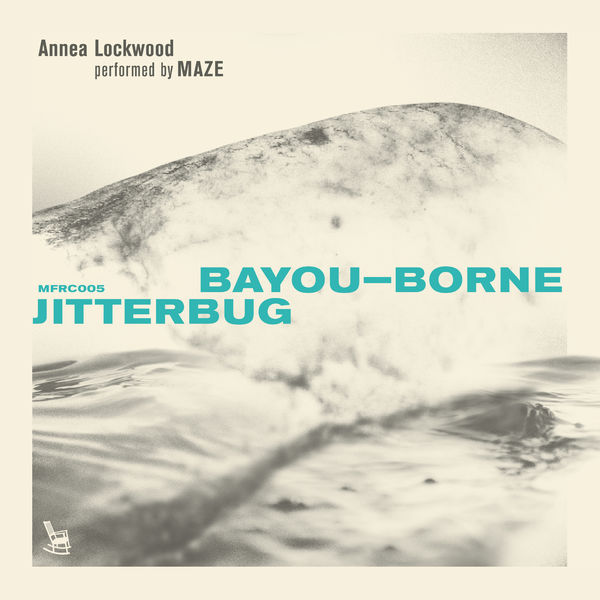 In 2017 MAZE gave a stunning interpretation of Jitterbug at the Tactile Paths Festival in Berlin, full of subtle detail and fluid energy. That they have returned to the work now – and have also created this beautiful realization of bayou-borne, for Pauline – is something for which I am deeply grateful.

Both works draw on improvisation and are guided by graphic imagery: of a river system in Texas and of rocks from the Continental Divide in Montana.Bayou-born, for Pauline (2016) is dedicated to Pauline Oliveros and was composed with her passions in mind. She was born in Houston, Texas, so I created a graphic score from a map of the six bayous which flow through the city to Galveston Bay, thinking that she would have known one or all of those rivers intimately as a child – swimming, wading, river mud between her toes. She was a superb improviser, so it is scored for six improvising musicians with each player reading one of the rivers as a guide. Their lines move independently at first, coming closer together at the confluences to form duets and trios, before converging at the red star, the whole sound darkening as they approach Houston in memory of the devastation and deaths caused by Hurricane Harvey in 2017.

This is one of eighty-five scores contributed to a memorial celebration of Pauline’s life: Still Listening: New Works in Honour of Pauline Oliveros (1932-2016), held at McGill University, Canada, in 2017. I wish to thank Doris Yokelson for the design of the map.

Jitterbug (2007)
A rock surface is not perhaps the most intuitive choice on which to base a graphic score, but I was looking for something which might be an unfamiliar stimulus for the musicians of the Merce Cunningham Dance Company, which commissioned me to make a piece for a new dance, eyeSpace, in 2006. That summer I was recording aquatic insects up in the Rockies near Glacier Park, Montana for the piece, and started collecting rocks from the area, striated with unusually clear and beautiful markings. This underlying connection between image and sound is important to me, and of course, the title was irresistible.

Six of these rocks were photographed by Gwen Deely. The players interpret two or three agreed-upon images together, one after another within a predetermined time frame, reading each image in layers from right to left and from bottom to top, as described in the textual score.

I have composed pre-recorded sound files, or episodes, which create an expanded sound world around the players, drawn from those aquatic bugs and from terrestrial insects.* These recordings are interwoven with resonant tones from bowed gongs and piano strings performed by Gustavo Aguilar, Joseph Kubera and William Winant, and recorded for the project by sound engineers Marilyn Ries and Maggi Payne. In performance, these episodes are brought into the mix by an additional player according to the evolving shape of the piece.