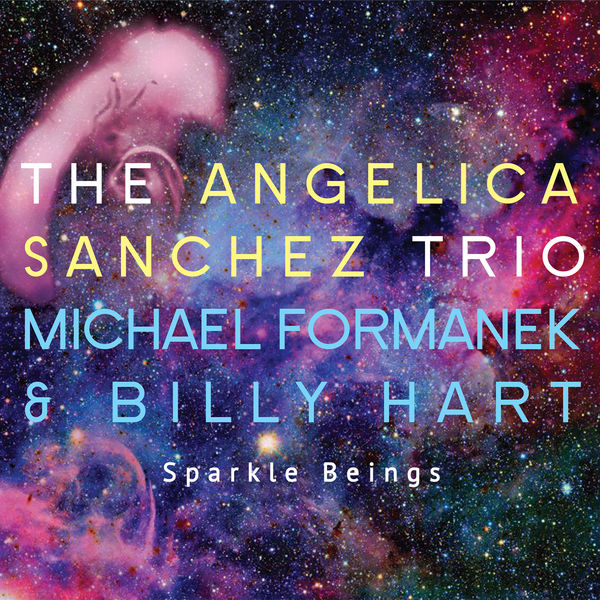 There are individuals in everybody’s life who stimulate the mind and imagination. If one is lucky enough, these special inspirations needn’t be historical figures. They can be friends and collaborators who can be met any day. Pianist/composer Angelica Sanchez holds many such stimulating figures close by and on her new recording, Sparkle Beings, she showcases potent examples of inspiration being channeled through remarkable people, past or contemporary.

Sanchez has been a stellar piano stylist and musical conceptualist in the New York scene for some time. She felt destined to get to New York even as a talented teenager from Arizona, telling the instructors and fellow students at the Ed Schuller led Sandpoint Music Camp in Idaho that she intended to move to the City. She did so the next year.

It was at Sandpoint that Sanchez met the great drummer, Billy Hart. Though Hart was one of the first masters that she interacted with, it has taken until now for Sanchez to invite Hart to record with her. Sanchez also invited her longtime friend and collaborator, bassist Michael Formanek, to take part. Long associations with both bandmates provide the knowledge of what they can do for the music but, also, the exciting feeling of not knowing where the music will go because of their creativity in the moment.Pianist Angelica Sanchez is known for her colorfully inventive, often free-leaning post-bop jazz, a style she showcases on her vibrant 2022 trio album Sparkle Beings. While not her first trio album, it is the first to feature two veteran icons, bassist Michael Formanek and drummer Billy Hart. Her creative association with both artists is extensive, going back to 2003 for Formanek (who played on her debut), and to the ’90s for Hart (whom she met at a Gunther Schuller jazz workshop while she was a student). Since then, she has worked with Formanek extensively in various formations. Here, she brings both players together, exploring works by some of her biggest piano influences as well as her own compositions. While Sanchez often plays songs by other composers in her live shows, she rarely records them. This adds to the sense of illumination on Sparkle Beings, as if Sanchez is opening up a window on her development as an improviser. She takes on Cecil Taylor’s noir-ish fever dream “With (Exit),” diving into the song’s sneaky melody as Formanek and Hart twirl around her in woozy, bluesy reverie. A similarly spectral atmosphere permeates her spare deconstruction of Mexican pianist Mario Ruiz Armengol’s “Preludio a un Preludio.” The pianist’s own songs conjure an equally dreamlike quality, as on the title track, which starts with a rhythmic pattern from Hart that sounds like falling rain filmed in black-and-white before Sanchez and Formanek enter, adding bird-like color to the scene. Even more evocative, “Phantasmic Friend” is a slow-moving ballad in which Sanchez’s dusky chordal harmonies swirl around your head like smoke in a dark cafe. Particularly compelling is her opening reading of Mary Lou Williams’ “A Fungus Amungus,” in which she and trio partners lunge back and forth in off-kilter harmony like a modern dance company. Later, on the closing track, she combines her song “Before Sleep” with Duke Ellington’s “The Sleeping Lady and the Giant that Watches Over Her,” a song culled from his 1972 album The Latin American Suite. Both tracks wryly straddle the line between swinging, urbane bop and the boundary-less free jazz of artists like Ornette Coleman, a balance Sanchez strikes throughout Sparkle Beings. – Matt Collar