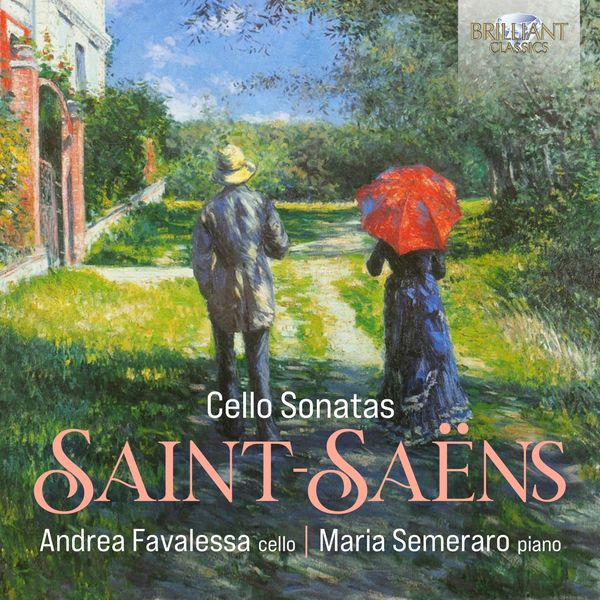 Prior to the turn of the 20th century, Camille Saint-Saëns enriched the cello repertoire with two important compositions his Cello Concerto No.1 in A minor (Op.33) and his Cello Sonata No.1 in C minor (Op.32), which he dedicated to cellist Jules Lasserre. The writer Emile Baumann hailed this first Cello Sonata as “a unique work”, a masterpiece. It was composed in the autumn of 1872, and its first public performance – with J. Reuschel on cello and the composer at the piano – was given on 26 March 1873 at the Salle Érard in Paris. The work is divided into three movements: the first and third have a tragic character, while the second offers an oasis of quiet serenity. The work opens with a dramatic Allegro in sonata form. The second movement stems from an organ improvisation performed by Saint-Saëns at Saint-Augustin. The final movement takes up the tumultuous and agitated character of the first and ends in an unrelenting race.Some 30 years separate the Cello Sonata No.2 in F (Op.123) from its predecessor. The fruit of laborious work, it was completed in early 1905. Saint-Saëns, adopting a typically self-deprecating tone – or perhaps merely to manage expectations – wrote to his publisher Jacques Durand on 16 March 1905, ‘Naturally the Second Sonata will not measure up to the First: when La Fontaine published his second collection of fables, everyone declared it inferior to the previous one.’ The Sonata is structured in four movements, the first in sonata form with contrasting heroic and lyrical characters throughout. The second movement is a Scherzo with eight variations, each with its own identity while maintaining a link to the theme, one of them in the form of a fugue. The third movement is, in Saint-Saëns’ words, ‘a romance that will delight cellists’, and he wrote of its concluding section, ‘the Adagio will bring tears to sensitive souls’. The sonata ends with a playful, light Rondo in which both piano and cello engage in technical virtuosity and imitative games.

Camille Saint-Saëns (1835-1921) is one of the most important French composers of the nineteenth century, his oeuvre embracing important orchestral and chamber works, as well as works for solo instruments, alongside a few operas and church music. However, in his time, Saint-Saëns also made his name as a pianist and organist. His music has a universal appeal with its infectious melodies, instrumental brilliance and a happy blend of charm, lyricism and wit.

This new recording presents Saint-Saëns’ two cello sonatas, written 30 years apart from each other, both combining drama and serenity, masterpieces in their genre and cornerstones of the repertoire.

Played by Andrea Favalessa (cello) and Maria Semeraro in wonderful and sensitive partnership, whose earlier recordings for Brilliant Classics (Strauss/Thuille cello sonatas BC 95238 and Casella Complete Works for Cello & Piano BC 94823) received outstanding reviews in the international press.