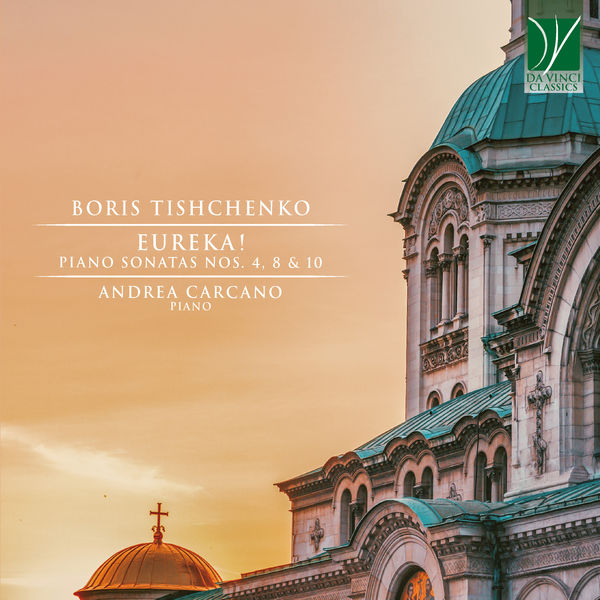 In one of the few interviews he granted, Boris Tischenko declared that he had always acknowledged the piano to be an ideal synthesis of the symphonic orchestra. In spite of this, his piano writing reveals his very deep faith in its most characteristic possibilities; from certain standpoints, it is reminiscent of that of those who knew the keyboard best and of its greatest specialists. In this sense, his Sonata no. 4 op. 53 (written in 1972, and dedicated not to a person, but rather to one of his favourite cities, Prague) is really emblematic. The first movement begins with a long monodic section, without any accompaniment, which could be a clarinet solo. Only after 53 measures, the first discrete comments of a bassoon do appear. In the same fashion, the beginning of the third movement (following an intense Adagio entirely characterized by rhythmical ambiguity, in a continuing balance between an implicit rubato and a rubato fixed by notation) could be a solo of doublebass pizzicatos. Perhaps, even more rightly considering its jazz-like character, it could even be a solo of baritone sax, to which interventions by the tom-tom and/or cymbals are added towards the end, giving life to a true exciting ending. Other composers were able to electrify their listeners without losing their identity while taking inspiration from coeval jazz music. These include, for instance, Hindemith and his Suite 1922 or Donatoni’s Hot. Tischenko rightfully belongs in this category. Doubtlessly, moreover, his constant and prolonged quest of how to develop a bare melodic line, taken as the beginning of keyboard pieces, is rarely found outside the works of priestly and passionate researchers such as Domenico Scarlatti and Franz Liszt. As the discourse evolves, other clear linguistic and instrumental influences surface. They are certainly ascribable to the models in vogue in contemporaneous Russia: for instance, the influences deriving from Tischenko’s studies under Šostakovič and Ustvolskaya certainly had an importance of their own. Still, there is always a clear individuation, a very personal and strongly characterized one. Tischenko is a composer whose signature style is constantly present in his output, even in the rests, even in the moments of structural silence.

Sadly, and even though Tischenko enjoys more consideration in Russia than in the rest of the world, it is difficult to find detailed information about his output. This is impossible even when one gets in touch (or attempts to do so) with the most serious institutions of his own St. Petersburg. Therefore, the fact that his Sonata no. 10, “Eureka” (1997) bears a double opus number in its header (4/124) leads us only to suppose that this same Sonata is the reworking of a piano Suite currently lost, though present in the catalogue of his works. This Suite had been written forty years earlier, and was classified as op. 4. This supposition is reinforced by the idiomatic similarities it shows with another work of that period, i.e. the Ego Suite op. 6 (which, different from op. 4, is well documented in the form of publications). In this work, the composer’s style is already perfectly delineated, and his creative ability expresses itself with absolute certainty and authority. Ingeniousness and solidity surface even from the mere expression of the thematic invention, which is always limpid and deep at the same time. (One example of this is the beginning of his extraordinary Eighth Symphony, of 2008). These traits are all the more impressive if one considers how heavy was the heritage he had to bear on his shoulders.

The Sonata was defined by its same composer, in its subtitle, as “a scientific research sonata for piano”. One wonders, therefore, if its six movements can give us effectively some indications on the composer’s personality. For example, in what kind of an exquisitely psychological relationship does the initial “hypothesis” stand with respect to the final “negation”, which actually constitutes a shortened recapitulation of its musical material? Do the variety of developments of the “doubt” (the Sonata’s fifth movement) and the expansion of a so extremized instrumental writing really find a solution in the Alla marcia and in the risoluto which brusquely close the same movement? One could go on with questions. Indeed, perhaps it is precisely in the insinuation of doubt, in the constant formulation of questions (even of contradictory ones) that we can find the most intimate essence of Boris Tischenko’s creative power.

The spirit animating Sonata no. 8, which closes this programme, is a true demonstration of the composer’s strength and ambition, and it seems to be much more affirmative. Should the basic question be: “Is it possible to write a piano sonata with an unabashedly neoclassical foundation in AD 1986, when glasnost was fully blooming, and representing effectively something new?”, its answer (“Yes, it is possible”, without necessarily getting to “Yes, so it must be”) could be embodied precisely in this composition. This Sonata is sculpted in a transcendent and atemporal Neoclassicism, and is articulated into three movement with a diamond-like construction. A synthetic Sonata Allegro (with repeated exposition) is born from the cell of a simple interval of a minor third. Its developments do not exclude true harmonic and dramaturgic coups de théâtre. A masterful Theme with variations represents one of Tischenko’s favourite forms. It comprises a strong and gradual accumulation of tension, reached slowly, and more synthetically oriented to its dissolution towards the end, as had happened with the first two movements of Sonata no. 4. It does not exclude an aleatoric space corresponding to the climax: here the performer has a certain room for intervening in the choice of the sequences in the dust of notes supporting the Chorale. The final Rondò-Sonata has a noteworthy extension. Its initial subject (a theme by A. Ametov) seems to be the ideal announcement of a fugue. It soon leaves space for grotesque and almost circus-like moments. They are counterbalanced by two broad returns of the subject in a more lyrical and meditative version. Here, the use of several types of clusters is scrupulously noted, with the upper or lower part of the hand playing with closed fingers. The composer kindly allows for “casual” notes to appear. The end of this Rondo, grandiosely oblique and involving, is a further push (after very short and sussultatory citations of the various themes) towards a sonorous atomic mushroom, with sequences of clusters (with extended fingers, this time) beating the keyboard before the definitive restatement of the assertive initial subject.

A very humble final consideration. Especially in our time, characterized by a true bombing of information and an extraordinary ease in finding it, music history is literally filling with “unjustly neglected” composers (and especially female composers!). True, in some cases this negligence may have had some ground; however, it is also true that in many circumstances their rediscovery constitutes a true enrichment. Of course, yours faithfully has not the needed authoritativeness for pointing out a historical mistake. However, following a real, recent, and sudden coup de foudre, he could not subtract himself from the need to pay a heartfelt, very personal and admiring homage to the noble and authentic composer whose name is Boris Tischenko.