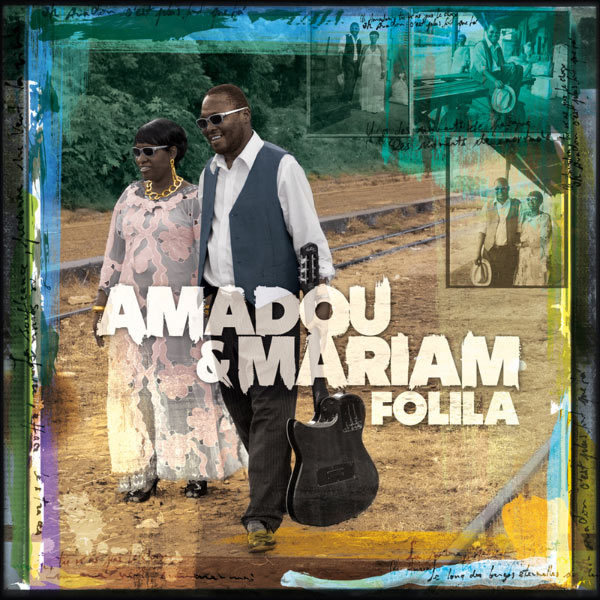 The story of Folila the word means music in Bambara boasts three distinct chapters, and is a tale of how two records became one. Marc-Antoine Moreau, the duo’s long-time manager and producer explains: “The original idea was to make two albums: One was going to be a crossover record made in New York City, where Amadou & Mariam have many musical friends and relationships; and the other was to be a more rootsy album recorded in Bamako with mostly African guests and African percussion instead of a drum kit.” Both plans came to fruition, but when Amadou & Mariam listened back to the richness of the two sessions, a third way suggested itself: to combine the two recordings in a seamless, organic fashion. The resulting work is an example of how tradition and modernity can work together to generate something new and unique.

On 2012’s Folila (which translates as “music” in Bambara), Mali’s famed Amadou & Mariam, the husband-and-wife duo, effortlessly prove that “purist” alarm calls about melding popular and traditional musics across geographies because they dilute authenticity are not only inherently false, but their motivations are suspect. Amadou & Mariam originally cut twin albums — same songs, tunings, and tempos — one in New York with Yeah Yeah Yeahs guitarist Nick Zinner, Santigold, Theophilus London, members of TV on the Radio and Antibalas, the Scissor Sisters’ Jake Shears, and Bertrand Cantat. The other was a Malian offering, cut in Bamako with master musicians, including Bassekou Kouyaté on ngoni, Zoumana Tereta on sokou, and Toumani Diabaté on kora, to name a few. A possibility presented itself when they took the completed sessions to producer Marc-Antoine Moreau in Paris. He was asked to try to bring the albums together. Moreau enlisted other producer/engineers — Kennie Takahashi, Renaud Letang, Josh Grant, and Antoine Halet — to assist. The end result is an organic-sounding masterpiece of cross-cultural collaboration, sung in three languages — Bambara, French, and English (sometimes in the same song). Production magic aside, this project wouldn’t have succeeded were it not for truly amazing songs (written by the duo) and inspired performances by all the musicians. “Dougou Badia” features crunchy guitar interplay between Amadou’s instantly recognizable percussive style and Zinner’s more rockist attack; it’s fuel for a soaring duet between Mariam and Santigold. “Wily Kataso” features Amadou & Mariam with Kyp and Tunde from TV on the Radio on lead vocals; the meld of the two guitarists with Kouyaté’s ngoni and the popping rhythm section is infectious. “Metemya” features Shears and Amadou’s voices with the latter’s knotty, raw guitar and Wurlitzer from Antibalas’ Victor Axelrod amid layers of organic percussion. “Nebe Miri” features London rapping and singing in complement to Amadou’s lead vocals, all drenched in a soulful meld of harmonies, three guitars, keyboards, and dundun drums. “C’est Pas Facile Pour les Aigles” is a rave-up that combines highlife, power pop, and Bo Diddley, and features Ebony Bones singing with Mariam. On “Sans Toi,” Mali’s traditional instruments such as sokou and kamale ngoni appear alongside guitar, piano, and the duo’s hypnotic vocals. The haunting “Mogo” features bass clarinet, ngoni, djembe, dundun drums, and slide and rockist guitars and chants. “Chérie” is simply presented with Mariam above a Malian children’s choir, with Diabaté’s kora adding a carefree rural feel to close it. Forget prejudices about “world music”; Folila is great music. Period. – Thom Jurek