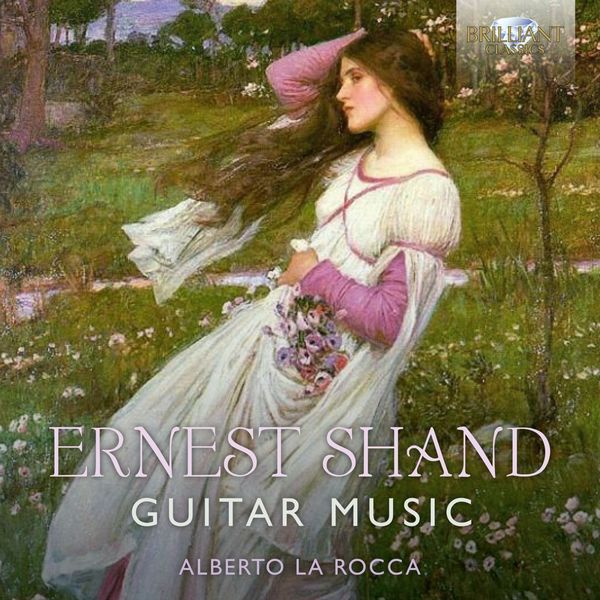 The first ever album dedicated to the music of Ernest Shand, including several first recordings.

According to the guitarist Alberto La Rocca, Ernest Shand can be considered ‘one of the greatest composers for the guitar of all time’. Born into a musical family in Hull in 1868, Shand firstly learnt the rudiments of the instrument from his father before coming under the instruction of Catharina Pratten, a German guitarist who had performed as a child with Regondi and later with Gounod and Tárrega. She later married the English flautist Robert Sidney Pratten, settled in the UK and became known as ‘Madame Sidney Pratten’, and as one of the most celebrated guitar virtuosos of her day.

Shand quickly proved himself to be her most talented pupil, and Pratten declared that his compositions far surpassed her own. During his lifetime Shand was widely recognized as the greatest English classical guitarist and composer, but his music fell into obscurity soon after his death in 1924. His surviving output of 220 works reveals a guitar composer of great originality and charm who had a gift for spinning infectious melodies.

Many of these pieces were originally composed for Shand to perform himself on tours which took him afar as Australia. He retired from performance in 1897, however, after being assualted at a concert in Nottingham by a Russian audience-member who had taken exception to a patriotic song. Thereafter he concentrated on composition, and his later music inflects his essentially Romantic style with bold modulations, modal writing and hints of the Impressionism that would become hallmarks of the revolution in guitar music wrought some decades later by Villa-Lobos above all.

The sentimental melodies and colourful harmonies of Shand’s music impart a unique Victorian flavour which often seems to echo the sing-along anthems and nostalgia of English music halls. There is an instant, repeatable charm to the gently swaying rhythm of the Prélude et Impromptu; a teasing and memorable melancholy to the melody of the Morceau lyrique No 2; and a no less catchy wistfulness to the Légende which has survived on the fringes of the repertoire as probably his best known work.

In 2016 Brilliant Classics issued Alberto Rocca’s collection of music (95369) by the most celebrated guitar virtuoso of the last century, Andres Segovia. ‘La Rocca’s technical facility cannot be faulted… We are fortunate to live in an era when these miniature master pieces have emerged from obscurity and when guitarists with the capabilities of Alberto La Rocca have embraced them, and found a place for them in recorded history for all to enjoy.’ (MusicWeb International)

Born in Kingston upon Hull (England) on 31 January 1868 into a family of musicians, Ernest Shand (born Ernest William Watson) first took up the violin and piano, then the guitar, which he studied with the help of his father. He studied harmony at Holy Trinity Church and won scholarships to Hull Grammar School and Derby College. From 1888 he took guitar lessons from Madame Sidney Pratten, a guitar virtuoso and composer (she had performed as a child with Regondi and later with Gounod and Tarrega). In his day, Shand was unanimously recognised as the greatest English concert pianist and composer for the guitar. However, as the guitar was only appreciated by a few guitar enthusiasts in England at that time, Shand struggled to make a living as a concert pianist and composer, often turning to a more lucrative job: as an actor and variety singer. It was here that he began to adopt the pseudonym Ernest Shand alternating his activities as an actor and guitarist-composer, performing in the best theatres in London.

A traumatic incident occurred in Nottingham a few years later when Shand was attacked by a Russian who did not like one of his patriotic songs. His injuries inflicted him for the rest of his life and the shock made him withdraw forever from public performance and concentrate on composing. He died on 29 November 1924.

His output comprises short character pieces, ranging from dances to marches, from lyrical sketches to rhapsodic fantasies. The quality of his writing is always of a high standard: the melodic line, imaginative and engaging, is supported by a refined and elegant harmony, with a taste for modulation that demonstrates his profound knowledge of the major composers of his era; these characteristics are maintained even in his more salon-like pieces.

Played with dedication and affection by Alberto La Rocca, who previously made a beautiful recording for Brilliant Classics of guitar music by Segovia.