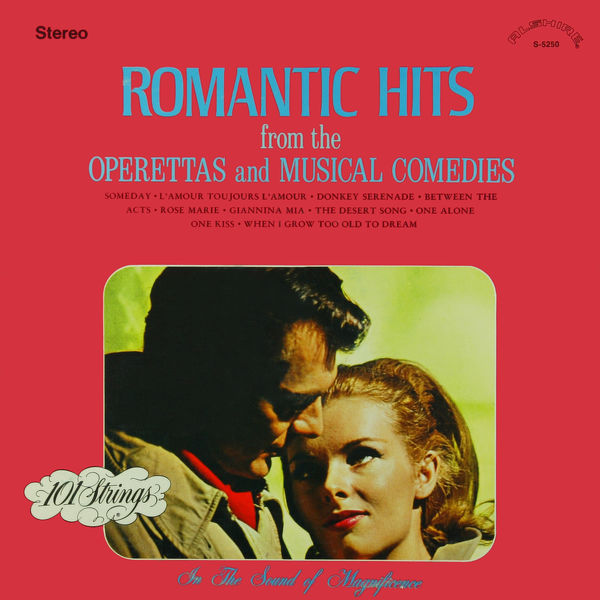 One of the most prolific and reliable names in instrumental easy listening music, the 101 Strings Orchestra has literally recorded hundreds of albums since its inception in 1957. Their trademark sound is built on a reverence for melody, pristine production, and a pleasant, relaxing ambience; while occasional albums have concentrated on brass, piano, guitars, and even mild rock & roll rhythms, the string section – true to the group’s name – nearly always remains front and center, because of its lush, soothing sound qualities. Most of their albums were built around some unifying theme, whether the work of a well-known artist or songwriter, a specific topic (patriotism, holidays, et al.), TV/ movie themes, songs from a particular country, revampings of familiar tunes from other genres, and so on. The group was founded by producer/engineer Dick L. Miller, who was searching for a way to mimic the sound and style of orchestras led by “name” conductors like Mantovani, without the expense involved in securing their services. He hit upon the idea of recruiting unknown European groups at a much lower cost, and made the 101 Strings Orchestra into something of a brand name (since the personality of the group rested with the arrangements, the individual musicians were somewhat interchangeable, so long as they could play in the preset style). The orchestra’s first home was Miller’s own Somerset label and their first arranger was Robert Lowden; he was followed by Joseph Kuhn and Monte Kelly in turn, all of whom wrote occasional original numbers as well. In 1964, Miller sold the whole 101 Strings package to the Alshire label, which continued to turn out product with assembly line regularity over the next few decades. During their first decade, the 101 Strings would occasionally offer a more experimental album as a change of pace, but that all stopped after their fan base’s reaction to 1968’s futuristic and at times unsettling Astro Sounds From Beyond the Year 2000 (which became a sought-after item among latter-day space age pop fans). In 1995, Madacy Entertainment purchased the Alshire label and began reissuing a great deal of the 101 Strings back catalog on CD, not to mention new material.