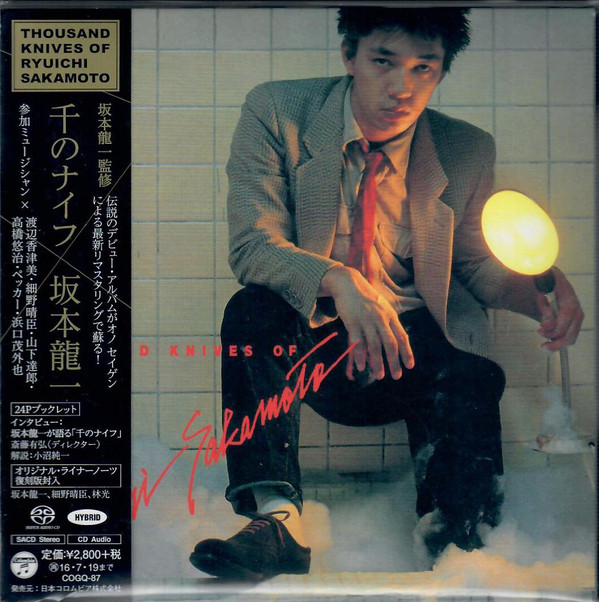 Ryuichi Sakamoto is a Japanese musician, composer, arranger, record producer, writer, singer, pianist, actor, and activist, based in Tokyo and New York. He began his career in the 1970s, first gaining major success in 1978 as a member of electronic music group Yellow Magic Orchestra (YMO). He concurrently pursued a solo career, releasing the experimental electronic fusion album Thousand Knives. The album is named after Henri Michaux’s description of the feel of using mescaline in Misérable Miracle. It was recorded in about 500 hours, and Sakamoto would spend whole days without sleeping working on it.

Ryuichi Sakamoto’s first solo album appeared before he formed Yellow Magic Orchestra in late 1978, after the young keyboardist had earned his M.A. in music from Tokyo University. Six long instrumentals make up this CD, but apart from a taste for Asian-sounding synth lines, they hint at very little of what was to come in YMO. “Thousand Knives” is a long disco-lite jazzy workout with a very un-synthesized guitar solo by Kazumi Watanabe (who would later join YMO on tour and have his solo album produced by Sakamoto). Side two’s “Da Neue Japanische Electronische Volkslied” and “The End of Asia” (later revamped in YMO) are closest to the new wave of Japanese electronic music that he would spawn. “Island of Woods” and “Grasshoppers” trade in rhythm for sound landscapes, and the sort of cheeriness that would pop up later in Sakamoto’s childrens movie scores. Harry Hosono turns up on one track, and generally the album is a pleasant, if unadventurous, listen.